Munster leave Wales with a win but no bonus point 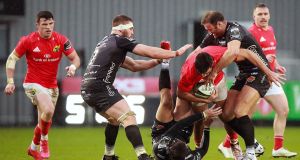 A wet day on a soft surface in Wales saw Munster win comfortably, but a win bonus point left dangling at Rodney Parade. Munster just could not take it with two disallowed second half tries from Darren Sweetnam leaving the dominant side on three tries, two from fullback Mark Gallagher and one from Calvin Nash.

Still Munster left as Conference B leaders and four wins from four, feeling that the job was well done but some frustration that the stubborn fourth try did not materialise.

Despite an early 3-0 lead for Dragons, Munster led from seven minutes until the end of the match which they controlled except for an oddly unfocussed period late in the first half, where they allowed Dragons in for a Sam Davies try and more importantly infused them with a little hope.

Following an exchange of kicks from Dragons’ Sam Davies and JJ Hanrahan, the match tied early at 3-3. Craig Casey, the Munster scrumhalf, was a sniping threat throughout and it took a break from Casey to trigger the first try as flanker John Hodnett showed awareness to take on the ball and feed fullback Gallagher for his first and a scoreline of 3-8.

It was then all Munster for the first quarter with Hanrahan adding a penalty for 3-11. Then, on 25 minutes, Rory Scannell put through a delicately threaded ball for Sweetnam to take on the run and transfer back inside to Calvin Nash. Easy pickings there and Hanrahan converted for 3-18.

But just before half-time Dragons, playing the advantage, put in a Hail Mary crossfield ball inside the Munster 22 with Davies well positioned to contest and touchdown for 8-18 at the break.

Hanrahan was clever and varied in his play and exchanged kicks with Davies for an 11-21 Munster advantage on 51 minutes. It was after that phase that two Sweetnam tries were disallowed, one for a player in front of the kicker, the other for an off the ball obstruction.

Gallagher finished a rewarding afternoon with his second try coming after Springbok Damian de Allende put him in on 72 minutes, Mathew Screech grabbing a second try for Dragons on the bell.

Liverpool back to winning ways; Gordon Elliott apologises for controversial photo 07:24
GAA congress signals greater involvement of women in organisation 07:00
The sports fan would like to wake up now, thanks very much 06:00
Six Nations: Will Connors sets the backrow benchmark in Rome 06:00
Ken Early: Referees and VAR now thrust to centre stage 06:00
Here is your handy guide to sport on television this week