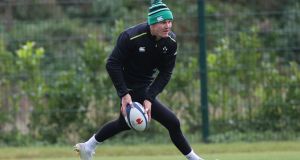 Whatever else, akin to Humphrey Bogart in Casablanca, Johnny Sexton will always have Paris. Given he played two years there with Racing 92, it’s perhaps fitting that the mist iconic moment of his gilded career so far was that 43-metre drop goal after 41 phases to pinch a 15-13 win in the first leg of the 2018 Grand Slam in the City of Lights.

When Sexton gathered the ball from the missed penalty by Anthony Belleau which would have pushed France 16-12 ahead behind the Irish posts, there were 77 minutes, 20 seconds on the clock. He had already told Jacob Stockdale to go to the left touchline for the 22-metre restart and Keith Earls to hug the right touchline as an outlet for a cross kick.

After Iain Henderson brilliantly reclaimed the restart fully five minutes and 20 seconds later – including Earls gathering that cross kick and buying time with his footwork – Sexton gathered Conor Murray’s 144th pass of the game to seal a dramatic win.

Demonstrating how much the world has changed two years on, the Stade de France will be empty next Saturday night (kick-off 9.05pm local time, 8.05pm Irish) when Ireland seek to clinch the 2020 Guinness Six Nations title and Sexton admits it feels like a lifetime ago now.

“A lot has happened since. Yeah, it does feel like a long, long time ago, but it’s great to be back in that situation now where we have a trophy on the line. It’s in our own hands in many ways, no matter what happens in the games before we’ll still be going onto the pitch being able to win the trophy, which is what you play for.

“You train hard for these big days and we’re looking forward to it now and we’re just trying to concentrate on our performance and make sure if we can get that right it gives us a chance,” said Sexton, preferring to look forward rather than back.

Presuming England run up a big score in the preceding game at the Stadio Olimpico against Italy, the likelihood is that Ireland will need a bonus-point win in a city where they have won three times since 1972 to claim the title.

“Yeah, I suppose we’ll just have to wait and see, won’t we?” said Sexton of that possibility. “But all we can control at the moment is our performance. So what we’re trying to emphasise to everyone in the squad at the moment is that we need to get our performance right, no matter what. If it’s just a win, or if it’s a bonus-point win, we’re still going to have to play well, no matter what.

“So let’s just focus on that aspect and we know that if we can perform well then we’ll give ourselves chances, and then it’s up to us try and take those chances on the day and be clinical.”

Although Sexton’s drop goal quietened the vast majority in a throbbing 80,000 stadium two years ago, the absence of fans should be more of a disadvantage to the home side, although Sexton had mixed feelings on that theory.

“It depends on the way you look at it. Yeah, you could say that, but I’ve played in the Stade de France before when they’ve turned on them, and it works out as a positive for us and a negative for them. You can look at it whatever way you want. It’s more like a neutral venue.

“They’ve had a week there, played last weekend and they’d be familiar with it. But, look, we’d obviously prefer to play in an empty stadium against them, than in front of 80,000 supporters.

“It is what it is. Still, a part of me probably wishes there was a crowd there. You’d miss it and you’d miss the supporters but hopefully it won’t be too long getting them back in.”

Even to beat France in Paris will, Sexton accepted, require a broad improvement compared to last Saturday’s 50-17 win over Italy.

“We’re trying to work on a lot of areas, and that includes set-piece, starter play attacks. There was some good stuff, again, some average stuff. All parts of our game, really. We weren’t perfect or terribly bad in either. We just know we have to be a lot better in all areas on Saturday.”

France are resigned to being without their hamstrung, game-breaking winger Teddy Thomas, whose typically opportunistic 72nd-minute try two years ago had set up their winning position in 2018.

They will, though, have the services of  another of Sexton’s former Racing team-mates, lock Bernard Le Roux, who received no sanction at  his disciplinary hearing on Tuesday for an act of foul play on Alun Wyn Jones in their 38-21 win over Wales last Saturday.

Speaking of Thomas’s absence, Sexton pointed to the abundance of resources at France’s disposal.

“They’re talking about [Arthur] Retière coming up from La Rochelle. I know him from Racing. He can play ‘9’ or on the wing. He’s an outstanding athlete – fast and elusive – and I suppose all their wingers are in that category. So, no matter who plays you have to be doing the same things for all of them.”

In this, Les Bleus have rediscovered what Sexton describes as their main strength, ie “their ability to score out of nothing” adding: “I suppose that points to the individual flair that they have all over the park. At halfback, you saw against Wales last weekend how it looks like Wales are defending well and then, out of nowhere, they’re gone. [Virimi] Vakatawa has obviously been in great form and [Gaël] Fickou has been doing really well.

“So from a backs point of view, they’ve just got threats throughout and we’re going to have to be unbelievably connected and together, because if you show them those dog-legs in defence or have those big gaps, they’re through it pretty quick. And up front, they’ve got power, don’t they? They’ve got big men and lots of power. It’s a big ask and we know that, but we’re preparing ourselves for a big performance.”

The game will also be notable for Cian Healy winning his 100th cap for Ireland and Sexton, his long-time Leinster and Irish team-mate, said: “Yeah, if he gets picked it’s an incredible feat. You look at the guys who have 100 caps, how special a player they are, you don’t get there easily.

“I think every player that’s in that category are legends of the game, really, in Ireland and I think he’ll add himself to that legacy if he gets that 100th cap. He deserves it, he’s so professional in the way he goes about his business, he’s had one particularly bad injury to come back from and once he did he put an unbelievable amount of work in to get himself back.

“So I’m absolutely chuffed for him, I’m very good friends with him obviously first and foremost, I know his family very well and his wife, Laura, and I know they’ll be so proud of him.

“Yeah, it’s another layer onto our story in terms of is his 100th cap. We want to honour him in the best way possible which would be to try and win the game.”