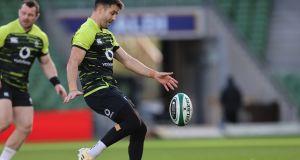 The longest and oddest Six Nations of them all comes to a conclusion fully 40 weeks after it started which, given the bleak outlook in the early months of the pandemic and how coronavirus has infiltrated sports lately, is an achievement in itself.

Yet the moniker Super Saturday seems to be stretching things, not when the day begins in an empty Parc Y Scarlets and, via the Stadio Olimpico, concludes in an increasingly empty City of Lights under curfew.

For all the talk of what Ireland need to win the title, they can actually still finish anywhere down to fourth, albeit come kick-off the preceding results will clarify the picture.

If Scotland are beaten by Wales then at least Ireland will be sure of a top three finish. Realistically, on the premise that England run up a sizeable bonus point win in Rome and so comfortably overhaul the 23-point leeway behind Ireland in points’ difference, then Ireland will need a bonus point win over a revitalised French team to win the title, otherwise it’s a play-off for second place.

Ireland have managed three wins in Paris since 1972, and have scored four tries in the city once before, when losing 43-31 in 2006. Hence, the Irish management are not inclined to put the cart before the horse and although England’s result will be known about an hour and half before the kick-off in Paris, they will not be informing the players of the outcome in Rome.

“We’ve spoken about that,” said assistant coach Simon Easterby. “If you’re distracted by external things which are outside of our control, it can be a way of derailing what we want to do.

“Clearly, there could be some point during the game, whether that’s first-half, half-time or during the game, where we need to discuss and make adjustments. But we need to win the game first and that is the primary focus. We need to be driven by a lot of our good processes that we do day in and day out, and make sure we’re not chasing things unnecessarily.”

Indeed, Ireland will have enough on their plate keeping a potent French attack at bay, and laying the foundations to impose their own freer and wider running game. The lines in the sand always remain the same, and if the French pack create any ascendancy over the Tadhg Furlong-less Irish scrum then crowds or no crowds, in time-honoured fashion they will draw huge energy.

Admittedly, Will Connors and Caelan Doris will have, by their own admission, learned a valuable lesson in that Saracens quarter-final when scanning prematurely for Billy Vunipola. Further preventing the French pack from generating momentum through their maul while also maintaining line speed, especially close in, are critical in stymieing their instigator-in-chief Antoine Dupont, who at times seems to be a second ahead of everyone else on the pitch.

Their one-off runners also come hard onto his passes and, as Easterby has said, their greater licence to offload has been founded on their ability to win collisions over the first four rounds. There’s a theory abroad that Ireland have a soft underbelly.

In Rassie Erasmus’ Springboks’ team talk in the Chasing the Sun documentary before the Rugby World Cup semi-final, he said of the Welsh: “They are not softies, they’re not like Ireland. They’re not like England, who go away. They are tough f*ckers.”

Informed of this, Easterby shrugged: “Listen, if that’s Rassie’s opinion then clearly that’s something that he has used to try and motivate his players to put in a performance against the Welsh.

“It is what it is. It’s not something I’d take too much time mulling over. I know you’ll see a performance tomorrow that, regardless of what Rassie Erasmus has said in that quote, would suggest otherwise.”

Furthermore, of course, Dupont and the classy Romain Ntamack can move the ball into the wider channels where Virimi Vakatawa’s strength, balance and offloading can open up any defence. Quite conceivably, Ireland may need four tries just to win anyhow.

Yet there are some encouraging auguries. Ireland never win titles in Lansdowne Road anyway, and their results so far are the same, and in the same sequence, as when lifting the trophy here in 2014.

Far from the spring sun on their backs, not only will Les Bleus be playing in late autumn but without any home fans in attendance, and nowadays there’s altogether less reason for an Irish factor. Johnny Sexton and the centurion, Cian Healy, each have 6-4 win-loss records over France in addition to draws, with Sexton on the winning side in six of the last seven and Healy on a run of six wins.

Wayne Barnes can be an overtly influential referee and you hope he has a good game, but Connors’ chop tackling should again bring Ireland’s array of poachers - CJ Stander, Doris, Tadhg Beirne and Andrew Porter - into the game more. Ireland’s breakdown work was key to their comfortable passage to victory last week (albeit against Italy) whereas it was a key feature of the 16-4 penalty count which went against France.

Les Bleus were also decidedly vulnerable under high kicks from the Welsh, and it would be no surprise to see Conor Murray’s box kicking re-employed this week. If there’s a weak spot anywhere, no matter how ugly, Ireland need to exploit it. There mightn’t be many of them.

In the heel of the hunt, you feel Ireland are going to need their best performance since the highs of 2018.