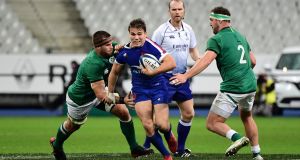 Despite playing well and appearing to be the better team for much of the first-half, Ireland’s tilt at the 2020 Six Nations title unravelled in a disjointed second half.

Ireland mixed up their attacking game up nicely in the first-half and played with plenty of control, but a missed penalty to touch amid four off-key Irish lineouts, an increasingly troubled scrum along with handling errors in part caused by scoreboard pressure demonstrated how much Ireland lost their way.

However, more than anything, France’s ultimately handsome win - while handing the title to England - also underlined their rejuvenation under Fabien Galthie and the degree to which the 2023 World Cup hosts are the coming force in the global game.

What separated Les Bleus from Ireland on the night was further evidence of their superior ability to conjure tries out of nothing. Predictably, the half-backs Antoine Dupont and Romain Ntamack were the creators in chief at the heart of this exciting French team.

Before kick-off, following England’s surprisingly laboured 34-5 win over Italy in Rome, the equation for Ireland to win the title had became, at face value, more achievable than might have been expected.

While a bonus point win would still have sufficed, so too would a six-point win provided Ireland scored at least one try.

France, for their part, required a bonus point win by 31 points or more to take their first title in a decade.

Their hopes were given an immediate boost within seven minutes. An airborne Vincent Rattez brilliantly kept a Dupont box kick infield and when France went wide left Johnny Sexton shot up but was stepped by Bouthier.

The net effect was to leave Andrew Porter, of all people, on the wing in a one-on-one with Gaël Fickou. He stood up and stepped the Irish tighthead, accelerated away from Conor Murray’s covering tackle and put the supporting Dupont - inevitably - away for the first try. Ntamack converted.

Ireland’s response was both composed and controlled. Generating plenty of go-forward momentum off Bundee Aki and the other carriers, a superbly angled grubber by Johnny Sexton looked sure to yield a try for Hugo Keenan until a wicked bounce above his outstretched arms.

But Bouthier was binned for batting the ball into touch, and Ireland patiently turned down three-pointers and turned a lineout and two scrums into a try when the centurion, Cian Healy, pumped his legs and was helped over the line by Andrew Porter and James Ryan.

Sexton converted and kicked Ireland ahead, but with the pill becoming wetter and greasier, at this juncture Jacob Stockdale couldn’t deal with two low, troublesome kicks. The first he got away with the first but the second fumble, after Rattez took Virimi Vakatawa’s deft offload and grubbered deftly on the right touchline with a penalty advantage, enabled Grégory Alldritt to nudge the ball ahead.

The French number eight was tackled without the ball from behind by Caelan Doris, leading to a penalty try and a yellow card for the latter.

Even so, Ireland’s response was again controlled, and the only score in the next 10 minutes was another Sexton penalty but, as the clock went the red, Sexton turned down a likely three-pointer to go to the corner; which was a risky, win or no-bust call.

France defended the maul well again and Dylan Crétin lifted the siege by winning a turnover penalty, although he clearly dropped to his knees in doing so and both Murray and Sexton were rightly irate with Wayne Barnes.

Hence, Ireland, despite being the better side, trailed 17-13 at the break and gave France the last mental energy boost before the interval.

Ireland put together another controlled attacking set after the resumption, but Bouthier read and dealt with Sexton’s chip. Bouthier also read a chip through by Aki and then dealt with a Sexton bomb which Andrew Conway chased before offloading to Ntamack.

Suddenly France were away as Ntamack made ground and released Fickou on the left wing. He chipped ahead for the ever-involved Dupont to gather, take Stockdale’s tackle and take Doris out of the game with an offload inside for his fellow musketeer Ntamack to score.

Ntamack missed the conversion but added two more penalties, the second another incorrect call by Barnes when adjudging Porter was part of the tackle before going in for a poach. But this made it 28-13, and Les Bleus were beginning to puff their chests out.

When Ireland went to the corner again, Cretin picked off Rob Herring’s underdone throw intended for Peter O’Mahony. Ireland needed a moment of divine inspiration, and after Dave Heffernan did well to reclaim James Ryan’s loose feed from a lineout, Henshaw gave Sexton a reverse option to cut back against the grain, beating a succession of tackles and then bouncing Rattez to score a superb solo try, Sexton converted to trim the lead to 28-20.

Stander kept Ireland interested by winning two more of his trademark penalties in the jackal, the second after Bouthier had taken a fine box kick by Murray, who was then replaced by Jamison Gibson-Park. But Ireland’s lineout malfunctioned again, and again.

They were also forcing things, understandably. Sexton was unhappy at being replaced after his fumble, and Stockdale lost control of the ball when attempting to get away from Vakatawa’s tackle.

Instead, again out of nothing, Ntamack re-gathered his own disguised, delayed and delicious chip when dropping the ball onto his left foot, then stepped Stockdale and put Vakatawa over before adding the conversion. Class is class.

Stockdale did finish smartly after a good bout of handling and Keenan’s offload but it neither looked nor felt like much of a consolation.