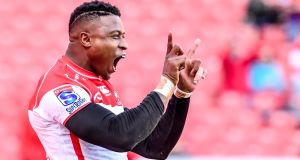 Aphiwe Dyantyi celebrates after scoring a try for the Lions in 2019. Photograph: Sydney Seshibedi/Getty

The spectre of South African rugby’s doping epidemic must not be glossed over before their franchises enter European rugby in 2021.

Take the ongoing case of Aphiwe Dyantyi. The winger, framed as the Springboks poster boy ahead of last year’s World Cup when named World Rugby breakthrough player of the season in 2018, tested positive for metandienone, methyltestosterone and LGD-4033 in July 2019. The B sample also came back positive. Dyantyi denies any wrong doing.

Fifteen months later and the case remains in limbo. Disciplinary proceedings finally began last month - having initially been held up due to Covid - only to be adjourned after three days of testimony with no reasons provided by the South African Institute for Drug Free Sport (SAIDS).

This should be a massive story in South Africa, right?

“I think this doping cases thing is just a stick the Irish journalists have been going at the Springboks with for a long time,” Ray laughed, “so I am not surprised to hear that.”

“There have been a couple [of cases]but haven’t Ireland had a couple recently as well?”

Just the one, Craig, which resulted in a three month suspension for Munster prop James Cronin, as opposed to 57 suspensions at all levels of South African rugby since 2011.

“I think a lot of those are out of junior rugby at the ‘Craven Week’,” said Ray “where the real problem is being tackled.”

A quick scan of SAIDS published suspensions proves the naughty schoolboy theory to be inaccurate. Doping bans are widespread in South Africa. And anyway, Craven Week is where the European-bound franchises recruit their talent.

The most pressing concern before Celtic Rugby DAC opens its door to South African teams is the sluggish pace of the Dyantyi case. Otherwise, that could become the norm.

Jamie Heaslip’s nomination for try of the decade popped into the timeline last week. It was in 2016 when Simon Zebo split the Italian midfield before an out-the-back offload for Jared Payne, who flipped a one handed ball inside for Sexton to Trimble to McFadden to Heaslip.

Zebo’s face could not mask his devastation when Racing 92 yanked him off, for a plump looking Kurtley Beale, 65 minutes into a two try Champions Cup final performance for the ages.

Unless Warren Gatland takes a punt, the European club scene might have to suffice as the pinnacle of Zebo’s never boring career. What a shame an exception to the unwritten IRFU rule was not made for him and Donnacha Ryan to feature at last year’s world cup when their skills and personas were needed the most.

Despite an honourable mention to Caleb Clarke - son of Eroni and next in the Tuigimala-Lomu-Rokocoko-Savea line of succession for the All Black number 11 jersey - Zebo’s inspirational showing against Exeter earns him the prestigious title, ‘Offloader of the Week.’

By the sounds of the man himself a return to Munster is never going to happen.

“We weren’t far away and we hope we can get to the end soon,” said Zebo. “We really want to put this star on our jersey, so we’re going to keep trying.”

400 - minutes is how much time The Springboks are contractually required to play before their international season can begin (Also, their European based players could not get insurance cover to leave their clubs).

“The real question is, do you chop his arm from the elbow or the shoulder. #pig” Wasps and Ireland hooker Cliodhna Moloney reacts to Sergio Aguero putting his hand on the neck of lineswoman Sian Massey-Ellis.

Nigel, This Is Not The NFL

When Nigel Owens sought to turn back time at the end of the Champions Cup final, Television Match Official Ian Davies had the perfect opportunity to flip the Welsh celebrity’s catchphrase into: “This is not American football.”

But this grandstanding flourish to end European rugby’s signature game was no joking matter. It was an unscheduled episode of The Nigel Owens Show.

“Take the clock back six seconds, eh, five seconds please,” Owens repeatedly instructed as the television clock was paused at 79.37.

When Owens signalled a kick at goal - after Exeter almost panicked and made the wrong decision - the clock did not restart. Nor did Exeter have a kicking tee ready for Joe Simmonds.

Owens: “Where is the tee boys?”

Twenty seconds elapsed when Davies states: “Nige, just let us know when you want the clock back on?”

“Give them five seconds,” Owens repeated.

As Simmonds lines up his kick, 39 seconds have elapsed with the clock still paused at 79.37 so Owens begins to wonder why the big hand is not moving.

Davies: “We are trying to sort it out Nige, don’t worry.”

Time, as we know it, restarted 50 seconds after Owens pointed at the posts. Simmonds nailed the penalty to make it 31-27 with 79.52 on the clock.

Davies: “Nige, that is time, the clock did not go on when you asked for it. Therefore, it is full time.”

That should have been that. Instead, we entered the farcical realm of a referee taking centre stage.

Owens: “The time keeper didn’t put it on for some reason. Wait a minute” he tells Finn Russell who is ready to restart the game. “[RACING] Captain come here.”

Owens: “Sorry, we had a mix up with the time keeper who didn’t put the clock back on so I am going to check with the TMO if the clock had gone 80 before the kick is over. If it was it is the end of the game. If it wasn’t we will be kicking off. Ok? Apologies for this mix up. Ian, please confirm with me if the time was up before the kick was over.”

Davies: “Ok Nigel I will explain what happened. You asked for the time to go off. We were working with the producers to turn that clock on and we were unable to do so when you asked. Ok? “

Davies: “However, when the ball crossed the posts it was around 79.57, ok? The clock should have been in excess of 80 because the clock was not put on when you asked it to be put on.”

Owens: “What I want to know is when the ball went over the posts was the time up, yes or no?”

Davies: “Technically, the time was up, yes it was.”

Owens: “Don’t say ‘technically.’ I need to know if the time was up, yes or no please when the ball went over the posts?”

Davies: “The clock was on 79.57 when it went over. However, I will repeat, when you asked for the clock to be put on we were unable to do so on the TV.”

Owens: “So the time is over you are telling me?”

Davies: “The time is over yes.”

Owens: “Confirmation: the time is over before the ball was over.”

Later that Saturday night Nigel provided further proof that he has transcended his rugby refereeing brief with an appearance The Chase quiz show.