The alternative to fans in stadiums, according to the IRFU, is financial collapse

Senior officials from the GAA, IRFU and the FAI have warned the Oireachtas committee on Covid-19 response of the financial hardships their associations face should sports matches continue to be played behind closed doors long-term in Ireland. 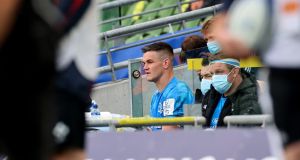 Does the Pro14 have a problem? The 2018 World Player of the Year, Johnny Sexton was rested for a grand final that Leinster won pulling up. That tells us all we need to know. Photograph: Inpho

There is a clear pattern. Every time a super club rises to the top of European rugby - be it Saracens or Toulon before them - the Irish provinces huff and puff but cannot blow the house down.

When the coach of a team that has gone 25 games unbeaten - bookended by Champions Cup defeats to Sarries - talks about his players being “spooked” on the biggest day of the season you can safely assume that deeper problems than preparation or physicality exist.

Leo Cullen knows better than the rest of us that Munster, Ulster, nor any other Pro14 side, offer little to no preparation for the examination Saracens gave Leinster’s set piece. That suffocating pressure does not exist week to week because the Pro14 is not fit for purpose. Not without the real South African franchises and not with the current rabble of uncompetitive outfits.

There are multiple examples of why the Irish provinces need to escape their current ‘domestic’ league but here’s one; the 2018 World Player of the Year was rested for a grand final that Leinster won pulling up.

The Scarlets blew both Leinster and Munster out of the water to capture the 2017 title only for their best forward, Tadhg Beirne, to move to Limerick.Welsh sides lack the organisation and interest to make the Pro14 work. The Scots are not good enough because their best players play for English and French clubs. The Italians and fifth string South African offerings are an embarrassment.

Leinster must wait until next year’s Champions Cup quarter-finals before they can truly know how far they have progressed.

What’s the definition of insanity again?

CVC - rugby’s new commercial partners - can fix this with one signature. If the Springboks director of rugby Rassie Erasmus can get the Bulls, Stormers, Lions and Sharks into an expanded Pro14 the Irish provinces will very quickly learn how to cope with the next English and French blitz.

The alternative is to get used to last weekend’s results.

“If these projections were to materialise, the very existence of professional rugby on the island would be under significant threat in 2021. Our audited financial statements for the period to July 31st 2020 will show an actual record financial loss of more than €35 million” - Philip Browne CEO of the IRFU

Philip Browne’s SOS to the government last Friday morning should be commended. Throughout this pandemic, and financial crisis that bleeds Irish rugby of €5 million a month, the chief executive has shown leadership by providing clear and unvarnished reality checks.

Browne’s financial prudence must have led to some interesting chit chats with his former FAI counterpart over the years.

The glassy horse shoe on Lansdowne road is the game’s major problem. As Browne told the Oireachtas Covid-19 Response Committee, unless international rugby can accommodate supporters “in meaningful numbers” at the Aviva, Thomond Park and Kingspan stadium, “the whole rugby infrastructure built over the last 150 years is under threat.”

Munster and Ulster are in the worst financial trouble, says Browne, but a plan has been handed over for Government approval to allow the most cherished fan of all to return to watch international matches this year: the 10-year ticket holder.

There is €32 million worth of these rugby lovers awaiting permission to attend matches. The 51,700 capacity stadium could take in 18,000 with one metre social distancing but 12,000 would cover the 10-year and premium ticket holders. The grave concern of Cillian De Gascun and his Nphet colleagues is how and where these supporters would congregate before and after games.

This is the health versus wealth debate with all its impossible conundrums, but fans in stadiums appeared to work in France, England and Australia over the weekend. The alternative, according to Browne, is financial collapse.

There were multiple strange goings on across the rugby world this past week: from the vice president of Georgia rugby shooting the country’s ex-Sevens captain in the leg when a meeting at union headquarters turned sour, to the unexplained adjournment of the Aphiwe Dyantyi doping case.

We should also be paying tribute to our most decorated rugby player after a stellar career in Leinster blue (problem is Rob Kearney has not announced his retirement and for all we know the 34 year-old might be eyeing up one last Lions tour or a retirement package in Japan or some coastal French town).

One known fact is Connacht appointed Ann Heneghan as their president and there is no better way to finish the column than open the floor to the first female to climb up the old man ladder of Irish rugby’s committee system.

“Positive discrimination is all very well but I don’t want women to be appointed to senior levels because there isn’t any women there,” Heneghan informed OTB AM. “I have just put in the years.You need to learn the ropes as you are coming through. I would hate just to have a women parachuted into a position on the management committee in the IRFU or another managerial position just because they want to improve the gender balance.”

She sounds like the right person for the job.