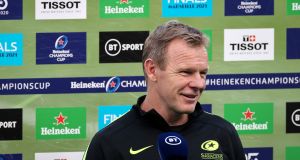 Mark McCall talks to the media after his team’s win over Leinster on Saturday afternoon. Photograph: Inpho

‘That’s Life’ by Frank Sinatra blared from giant speakers in the Aviva rafters as Maro Itoje and Vincent Koch strolled off the turf behind a flash of Leinster men sprinting for cover.

‘You’re riding high in April, shot down in May’ old blue eyes aptly surmised at half-time with Saracens leading 22-3 in a Champions Cup quarter-final that concludes Leinster’s 25 game unbeaten streak, dating all the way back to the last time Saracens “harassed” them in May 2019.

A familiar Irish failing against the Maro Itoje’s of this world; mauled into submission, completely out scrummaged and a usually competent number nine made to look out of his depth.

Despite an extremely draining second half revival, there can be no debate about Saracens superiority in this Anglo-Irish rivalry. All done without their suspended talisman Owen Farrell.

Leinster had clear opportunities. None more so than the 15th minute when they were camped on the Saracens try line with the score 9-3. Itoje’s intercept of Luke McGrath’s intended pass to Will Connors initiated a 40 metre swing down the field. There followed a reel of scrums for Koch to torture Cian Healy as much as Mako Vunipola and Jamie George had Andrew Porter’s head in a vice.

“I thought our scrum was unbelievable given that Mako hasn’t played a game,” said Saracens director of rugby Mark McCall. “It’s his first since lockdown and to come and scrummage the way he did and the way Vinnie Koch scrummaged was incredible. [LEINSTER]were probably lucky not to get a yellow card. It was certainly a big factor in the match.”

McCall outlined the blueprint for out lasting a team that appeared so confident in their own process that Leo Cullen and Stuart Lancaster rotated out Ireland internationals like Josh van der Flier and completely excluded Wallaby veteran Scott Fardy from the matchday squad.

“The players were so engaged, so alive to everything,” said McCall, the former Ulster and Ireland centre. “Then the onslaught started in the second half and we were probably passive, just hanging onto our lead, but there were some defensive sets in the second half which were out of this world.

“It showed everything that we hope we are about.”

The starting Sarries pack made 126 of their 187 total tackles, smashing Leinster runners like James Ryan and Caelan Doris into the dirt.

“It has been difficult for the group in the last five weeks to make the games in the Premiership have meaning,” continued McCall, eradicating a possible Leinster excuse for defeat. “Everyone was excited about today but my concern was whether we could flip a switch and just turn it on against a team as good as them. But we can and we did.”

This was Saracens, as brutally effective as we have ever seen them.

“I wouldn’t want to take too much credit for finding weaknesses in the Leinster team, there’s not too many glaring weaknesses to be honest. What we did talk about was trying to put them into some positions that they’re not normally accustomed to being in. Trying to harass them in the backfield as much as we could, force them to do things they ordinarily wouldn’t want to do 20 or 30 metres from their own goal line.

“We just managed to put them under enough pressure for that first 40 minutes in particular, to make them make mistakes and give us some penalties.

“We obviously scored a good try from a set-piece.”

1 Seán O’Brien: Anger over my parents’ break-up never left me
2 Plenty of positives for Farrell as Ireland hit the ground running
3 Ireland braced for a daunting assignment in Paris
4 Will Connors chops his way to the front of Ireland’s openside queue
5 Nicky English: Extra game will improve both Dublin and already formidable Limerick
Real news has value SUBSCRIBE

Madness or defiance? The GAA is taking a huge gamble in staging Championships 06:00
Limerick’s warning loud and clear despite the eerie silence in Thurles 06:00
Will Connors chops his way to the front of Ireland’s openside queue 06:00
Ireland braced for a daunting assignment in Paris 06:00
Division Four round-up: Wicklow lay down Leinster marker against Wexford 06:00
Crossword Get access to over 6,000 interactive crosswords