Devastating Leinster defeat has a distinctly Anglo feel to it 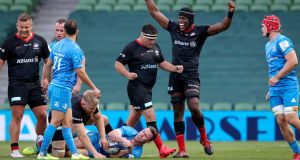 Every game is unique and this one certainly had its own storyline, but it also had uncanny echoes of Anglo-Irish matches from the past.

To begin with, of course, the way Leinster were unsettled - or “spooked” as Leo Cullen repeatedly ventured afterwards - was reminiscent of the way England shook an Irish side which conquered all-comers in 2018 at the start of the 2019 Six Nations in this same stadium.

Similarly, Leinster came into this game on a 25-game winning run which has now been bookended by devastating losses to Saracens, and also an 18-game winning sequence at the Aviva.

Trailing 22-3 at half-time, Leinster’s situation was only marginally less parlous than in the 2011 Heineken Cup final, when they were 22-6 behind at the half-way point against Northampton before completing a stunning comeback.

They revived memories of that day by working their way back to within a score but, ultimately, the way Leinster felt compelled to run from deep and force the pass as Saracens kept them at arm’s length in the endgame brought to mind memories of last season’s final in Newcastle.

Saracens were excellent in everything they did, especially in the first-half, when roared on by their noisy contingent on the sidelines, they won virtually every little moment. A fired up Jamie George led the way. Their pack did an almighty number on the Leinster scrum, which was their Achilles heel all day, and this had huge ripple effects on the game.

It yielded Saracens seven penalties to one at scrum time in a 15-10 penalty count in their favour, afforded them shots at goal and nine points directly, and gave them easy exits.

Taking regular time-outs, Saracens had better control of a stop-start game which was facilitated by the pedantic refereeing of Pascal Gauzère, won the first-half aerial duels, settled into a comfortable defensive groove and took their chances to add scoreboard pressure.

Leinster were clearly rattled from their failure to deal with the opening kick-off, and compounded their problems with unusually poor use or protection of the ball.

In the third quarter Leinster’s runners did start coming harder onto the ball off ‘9’ in negating Saracens’ line speed and they also found the edges as they intended. James Ryan grew into the game, as Ronan Kelleher, Ryan Baird and Josh van der Flier provided real ballast off the bench, and with their first touches Jamison Gibson-Park and Rory O’Loughlin helped set up the second try.

After Andrew Porter was muscled over, that rarity in the modern game, a peach of a set-piece try for Larmour to end a 20-game tryless run in blue dating back to December 2018, brought Leinster back to within five points and with over 16 minutes remaining. They had all the momentum.

They quickly earned a line-out inside the Saracens’ 22 thanks to Gibson-Park’s clever kick and Garry Ringrose’s strong chase, as Ross Byrne replaced a hobbling Sexton in what would be his first defeat in 24 appearances in the Champions Cup.

Leinster drove off Baird’s take but Michael Rhodes, who by rights shouldn’t have been on the pitch after his late high hit on Sexton seven minutes earlier, and Jackson Wray came in from the side to drag Kelleher down.

Each led to scrums and almost inevitable penalties, Goode landing the second to end the contest.

While this setback may, again, have had a distinctly Anglo feel, Garry Ringrose maintained: “Losing feels the same no matter who it’s against. But there were definitely opportunities presented to us which if we are going to hold ourselves to the highest standards as we do, we could have been better.

“Those opportunities presented to us by Saracens or those we created through our own play, we didn’t quite execute at the level that’s needed to win these big games. As heartbreaking as it is, it’s one of many learnings we can take from the game.

“It hasn’t been all good days,” added Ringrose. “I’ve endured some bad days since I started playing for Leinster. In the past it’s made us better as a group, so I’m hoping it’s going to be the same.”

Leinster will be hurting for some while after a first taste of defeat in so long. But Ringrose maintained it was “a good thing” that they have to start their 2020-21 season in a fortnight.

“The sooner we can get back out and going again the better for us as a group. I think it’s the same for everyone. Whenever the season is, it is what it is, it’s out of our control, to get back up and running, back in the saddle, is exactly what we want as a group.”

Not every season ends in glory, not even for Leinster, and in the long run this bitter defeat will fuel a relatively young squad in years to come.