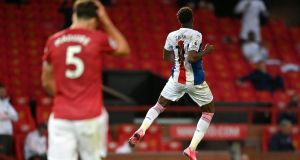 Ole Gunnar Solskjaer led the Red Devils to three cup semi-finals and third in the Premier League during a promising first full season in the hotseat, but a lack of transfer activity has since led to growing fan discontent.

Saturday’s season opener offered precious little relief from that pressure as United fell to a shock loss to Palace at an empty Old Trafford, where their former winger Zaha netted twice amid VAR drama.

Solskjaer’s side struggled throughout an evening that started with executive vice-chairman Ed Woodward saying the club had to be responsible with their resources given the challenges posed by Covid-19.

But the performance that followed only highlighted the need to improve, with Palace winning at Old Trafford for the second successive season — and few could argue with the result.

Andros Townsend capitalised on poor defending to give the Eagles an early lead that Zaha added to after a farcical period of video assistant referee intervention.

De Gea saved Jordan Ayew’s spot-kick after referee Martin Atkinson had checked the pitchside monitor and adjudged Victor Lindelof to have handled, only for Palace to be granted another attempt for the United goalkeeper marginally straying off his line.

Zaha slammed home the retaken spot-kick and, having seen United debutant Donny van de Beek pull one back, fired home another as his first match in the captain’s armband ended with a dream win at the place he used to call home.

Few expected Roy Hodgson’s men to make it back-to-back Premier League wins on Saturday, even though this was their third competitive match of a season that United were only just starting.

But that extra sharpness was evident from the outset, with De Gea breathing a sigh of relief after passing straight to an opposition player in a match that was only seven minutes old when the Eagles scored.

Tyrick Mitchell’s clipped pass down the left found Jeffrey Schlupp and Lindelof failed to deal with the threat, allowing the Palace man to fire in a low cross from the left that Townsend beat Luke Shaw to at the far post.

It was a smart finish but an avoidable goal for the hosts. Paul Pogba dropped a shoulder and unleashed a right-footed drive from the edge of the box that Vicente Guaita stopped as United looked to hit back, with Scott McTominay and Bruno Fernandes then trying their luck.

United were struggling to carve open the visitors and were denied a spot-kick as VAR Jon Moss decided after much deliberation that Pogba had not been fouled.

Frustration at that decision and this performance would have been compounded in stoppage time was it not for De Gea’s fine reactions when Ayew unleashed a close-range shot.

Zaha also tried his luck before half-time, which Palace returned from strongly as Ayew and Townsend threatened.

Mason Greenwood, who replaced the ineffective Daniel James at the interval, headed narrowly wide at the far post in the 60th minute, but Palace were proving a threat and Zaha found the net, only for the offside flag to be raised.

Van de Beek replaced Pogba in a bid to prise open Hodgson’s well-drilled side, but it would be a memorable debut for all the wrong reasons for the Holland midfielder.

There was disbelief around the handful of those at Old Trafford when Atkinson trotted over to the monitor to check a handball against Lindelof when blocking an unorthodox Ayew shot.

The referee pointed to the spot and there were cheers as De Gea got down well to his right to thwart Ayew’s spot-kick.

But relief quickly turned to incredulity as Atkinson ordered a retake having been informed that De Gea had marginally come off his line. Zaha made no mistake with that penalty.

The United goalkeeper clapped sarcastically that decision and Van de Beek looked to have given his new club a chance when capitalising on poor Palace defending to fire home.

But the hosts’ backline was not much better and Zaha was able to turn Lindelof and hit a low shot past De Gea five minutes from time.