The Offload: Chris Farrell was a distant relative of the man of the match 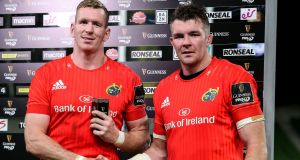 Munster’s Chris Farrell is awarded the Pro14 man of the match award at the Aviva Stadium on Saturday by his captain Peter O’Mahony. Photograph: Inpho

Being inside the empty Lansdowne crater on Saturday night was a first for everyone present. That we could see and hear past the barriers erected by professionalism was really cool.

This splendid isolation, with the silence only punctuated by players in agony and the booming voice of Donal Lenihan on commentary, cannot last forever but it felt like the reporters were teleported into the 1997 Living with the Lions documentary in that we were proverbial flies on the wall.

“It was a very strange experience,” Sexton said. “Before the game we spoke about the people watching. The amount of texts I got, it is always a huge game against Munster but knowing we are in the semi-final in two weeks, and still the amount of texts I got from people wishing us well and saying they couldn’t wait to watch, you felt it was a huge game. Even in an empty stadium we wanted to put on a show for people all over Ireland. Don’t know if we did that but there were a lot of guts shown.”

Despite damaging his hand the captain was sublime – cranky and ruthlessly accurate in equal measure – showing the excellent JJ Hanrahan precisely what is meant by the small margins players always talk about.

There’s two ways to look at these strange days: despair is the understandable reaction to the empty seats as the IRFU’s financial security ebbs away, or you can embrace the weirdness.

Leo Cullen, beaming into our laptops from 100 feet below, gets it: “I am missing you all. We should meet up somewhere.”

As Cullen finished an army of lawnmowers and cleaners began the night shift. The IRFU have done an incredible job to revive their sport.

We love Liam Toland. The former Leinster captain turned co-commentator extraordinaire has forgotten more about rugby than this column will ever know but Chris Farrell, despite 12 carries through heavy traffic in midfield, was a distant relative of the man of the match.

Josh van der Flier is still a phenomenal athlete, Jack Conan was an equally strong contender and CJ Stander had fantastic moments over Leinster ball – as the veteran number eights put the onus on Caelan Doris to respond – but Johnny Sexton nudges JJ Hanrahan to be named The Offload’s prestigious MVP.

Another odd happening on Saturday night was the sight of yet another young Irish halfback accepting defeat to secure a bonus point. Like the way Joey Carbery punted for touch in his own dead ball area against Japan last year, Craig Casey appeared to be following instructions to kill the game in his own 22 as the clock ticked red.

This would never happen in New Zealand.

“There has to be more adventure from this Munster team if they want to win trophies,” said Gordon D’Arcy on eir Sport. “They are saying that beating Leinster was not the priority. At least play two or three more phases. Have a bit more ambition.”

We strongly believe Stephen Larkham and Felipe Contepomi – the Munster and Leinster attack coaches – would try something unforgettable in the same situation. Somebody needs to rewire the brains of such special young talent, who presumably grew up purring over Carlos Spencer’s 101 metre try for Auckland against Canterbury.

“Once I missed the All Blacks job I actually reached out to Gats and asked him if I could go on that tour. I thought, ‘look, if I can’t be involved with the All Blacks, what’s the biggest thing - or actually bigger in its own self the Lions tour – to get involved” – Canterbury Crusaders head coach Scott Robertson offers his services to Warren Gatland ahead of the Lions touring South Africa in 2021.

Not to put a dampener on the return of rugby but Dave McSharry’s legal action against the IRFU and Aviva could have massive ramifications for the sport, specifically for players seeking to insure themselves against concussion.

What we have learned over the years – Cillian Willis versus Sale Sharks and the family of 14-year-old Ben Robinson who died during a schools game in 2011 – is such proceedings take years to reach any sort of conclusion and that the cost is extremely high, financially and psychologically.

“Rugby players who leave the sport due to a career-ending injury can be paid multiples of their salary through their insurance policies,” wrote Aaron Rogan in the Sunday Business Post. “Players who retire due to concussion, however, generally only do so when they have suffered a number of head injuries, meaning their condition may instead be classified as a repetitive injury by insurers.”

McSharry – a talented centre who came through Templeogue College and UCD before Connacht snapped him up – was forced to retire in 2016 after sustaining four concussions over a 12-month period. A professional player taking the IRFU to court over head trauma would be a landmark case that will be watched with great interest by all, especially parents.