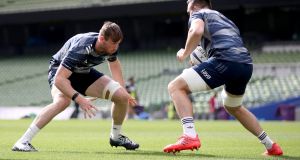 Ryan Baird and Jack Conan in action during the Leinster Captain’s Run at the Aviva Stadium on Friday. Photograph: Dan Sheridan/Inpho

Leinster will be playing in their third successive knock-out match when facing Saracens in the Heineken Champions Cup quarter-final on Saturday, with the prize of a home semi-final against Clermont or Racing a week later, and in making four changes to his starting line-up Leo Cullen has stressed it isn’t feasible to play an unchanged team each week.

The most eye-catching of the alterations sees Seán Cronin, who didn’t make the 23 for last week’s Pro 14 final against Ulster, sprung into the starting line-up. The 22-year-old Rónan Kelleher, despite having started all of Leinster’s big games this season when fit, is demoted to the bench after last week’s lineout malfunctions, although Cullen maintained this was not the sole reason for the change at hooker.

“There were multiple reasons really. We were four games into the season. Seán is a hugely experienced player for us and has played in a hell of a lot of big games. Rónan has played a number of games already this season and is still a very, very young player, and he’s on the bench and I think he’ll provide good impact.

“Seán, some of the experience he gives us for some of these big days, I think is important as well. James Tracy is very unlucky to miss out. Regardless of who we pick out of those three – one to start and one on the bench – the other person is going to be in my office asking why they’re not involved in the 23.

“That’s the way it’s been so far this season so we’re lucky in that regard, we’ve got three very, very good talented players there and obviously Dan Sheahan is coming up behind as well and has yet to feature.

“So it’s potentially a four-game sequence of knock-out matches. Over the entirety of the 15 and the 23 you want to make sure you have some consistency and continuity of selection, but you also want to bring a bit of freshness to it as well because I don’t think it’s realistic to play the same 15 week after week after week. I think you’d come unstuck because you lack a little bit of freshness.

“When we’re in a position where we’re lucky with the three hookers, that’s your classic example that you want all those guys involved. Seán wasn’t involved last week for the final. He had to park his disappointment and go away and get ready for his opportunity this week, so he comes in fresh this week and I think that’s important that we have some of that fresh energy.

“Big knock-out games do take their toll on guys, so it’s trying to just manage the group that we have and that’s something we’ve done all the way throughout the season really. I think that’s important to note.”

Johnny Sexton, Luke McGrath and Will Connors have also been restored to the Leinster starting XV against Saracens who, as expected, have moved Alex Goode from fullback to outhalf in the absence of the suspended Owen Farrell.

Connors, whose chop-tackling technique and high work-rate have seemingly been earmarked for this match, returns at openside after his impressive performance there in the Pro 14 semi-final win over Munster. He will be one of two players making their debuts in the competition, with fellow 24-year-old Hugo Keenan the other on the right wing.

This means that Josh van der Flier, despite a man-of-the-match performance in last week’s win over Ulster which secured Leinster a third Pro 14 title in a row, drops to the bench.

“That was such a close call as well,” admitted Cullen with something approaching a heavy sigh. “Josh was man-of-the-match last week so what do you say to him when he’s not involved?”

With Tadhg Furlong still not deemed fit enough to take part, one other alteration in the matchday squad sees Ryan Baird promoted to the bench in place of Scott Fardy.

With Goode starting at outhalf, Elliot Daly reverts to fullback as Mark McCall has brought in a fresh starting XV, none of whom played in last week’s win over Exeter.

The holders have been boosted by the return of fit-again England and Lions loosehead Mako Vunipola for his first game since the resumption. Scottish lock Tim Swinson comes into the secondrow alongside Maro Itoje in a pack featuring five of the pack which started last May’s 2010 win over Leinster in the final at St James’ Park and another, Vincent Koch, who made a significant impact off the bench.

The experienced Richard Wigglesworth has been preferred to the recently signed Welsh scrumhalf Aled Davies while captain Brad Barritt, like Wigglesworth in his final campaign with the club, is partnered in midfield by Duncan Taylor, with another experienced Scottish international, Sean Maitland, on the wing.

Leinster lasted tasted defeat against Saracens in the final in May of last year, all of 25 wins ago, and asked what they may have learned from that defeat, Cullen said: “It’s all little moments. There’s so many in the game that add up. How you play against Saracens, you need to be smart against them because they’re a very strong defensive outfit clearly, they put a huge amount of pressure on teams. As the game wears on they put more and more pressure on.

“It’s about making sure we’re smart in how we manage the game, all the little small bits of communication that goes on during the course of games. That’s different now to what it would have been like in packed out stadiums. It’s always the talk in the game, making sure we communicate where the space is and how we exploit the space that is there.

“On the flip side it’s trying to shut down the power runners they have. The Vunipolas jump off the page straight away, I know they’ve had changes in personnel but how we deal with the kicking and aerial threat they’ll impose.

“All those little battles within the game, staying compose and making sure that when opportunities come along you’re ready to pounce and execute in the heat of the battle. Lots of sound bites there, but that’s what it comes down to in these big games.”