Ireland outhalf is nearing a return to action for Munster; Ulster A take on Leinster A 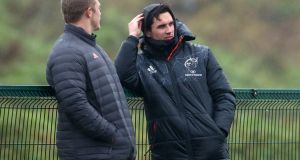 Joey Carbery is edging closer to a return with Munster. Photograph: James Crombie/Inpho

Joey Carbery believes that studying for a Masters in college and being able to stay involved doing bits and pieces in training and attending Munster team meetings has helped him through a long and difficult rehabilitation period as he edges towards a return.

There is no finite date for a comeback but he’s more upbeat about the prospect of finally being able to overcome an ankle injury that he sustained in a World Cup warm-up game against Italy in August 2019. He travelled to the World Cup coming on as a replacement in three matches against Japan, Samoa and New Zealand for a combined total of 65 minutes.

He came on for Munster against Leinster in a Pro14 game in December, and the following week, January 2nd, 2020 played 80 minutes against Ulster but sustained a wrist injury. He hasn’t played since, his ankle injury flaring up in August of last year during the Lockdown period and scuppering hopes of a comeback.

Speaking to the Munster website the 25-year-old offered an insight into what it’s been like during his yearlong playing hiatus. “Yeah, it has been pretty tough. Obviously it is not nice being injured but I am pretty blessed to have such good physio and S&C teams around me.

“It has been great to see the lads doing so well. Obviously I want to be out there. It’s been such a good start to the season so far. It’s never nice being injured but hopefully things change soon. It was tough at the start, we had an endgame in sight (in terms of my comeback) and then (I) didn’t hit that mark. It was almost more (disappointing) so it’s been relaxed and it’s (a case) of ‘I’m ready when I am ready’.”

Injured players traditionally manage a week off here and there to mentally and physically recharge before facing more rehabilitation but that hasn’t been possible for Carbery because of the pandemic. Instead he sought out another distraction.

“I started doing some college, (studying for) a Masters and have been pretty busy with that. I have been in here (HPC in University of Limerick) as much as possible, pretty much every day; it helps contribute to getting back sooner. I am trying to stay focused that way but college has been a great distraction for me when I am out of here.”

The saying goes that misery loves company and that can be applied to injured players. While they wouldn’t wish it upon any of their teammates, it’s always better to share the drudgery of the rehab process and chivvy one another along.

Carbery admitted: “Like you said it’s been a year since I have played. Guys have come in and out and it’s a bit demoralising seeing them start (their rehab) before you and then come out (of it) before (you). It’s great to have RG (Snyman), Neily (Cronin) and Mattie (Gallagher) joined us as well; obviously you don’t want anyone to be injured but it’s nice to have some sort of connection there. It’s way easier to gym and doing our rehab when there is a group of us.

“In the last month or so I have tried to jump in with the backs as much as possible. It makes it a bit easier when you are in the team environment getting to all the meetings; being in with the squad makes a huge difference mentally.

“It is the only thing that has got me through this is looking to the end (or being able to see it) and wanting to get back on the pitch. I suppose staying in with the meetings and talking to the coaches has helped a lot with that because you can keep clued in.

“You are not being able to physically do it but mentally you can prepare for the games coming up. That makes a big difference, makes me very ambitious and motivated to get back.” Hope the diligence and dedication is rewarded sooner rather than later.

Meanwhile Liam Williams will miss Wales opening game of the Six Nations Championship against Ireland on February 7th, after receiving a three game ban following his sending off for the Scarlets in a Pro14 match against the Cardiff Blues.

Ulster A v Leinster A

In other news the Ulster A team to take on Leinster A at the Kingspan Stadium on Friday (kick-off 3pm) contains a couple of ‘chips off the old block,’ so to speak. Scrumhalf Nathan Doak is the son of a former Ulster number nine, Neil while James Humphreys, named amongst the replacements, is a son of ex Ulster and Ireland outhalf, David.

It’ll be interesting to note how former Irish schools sprint champion, Aaron Sexton - he recently made his Ulster senior debut - gets on at fullback having excelled in the interprovincial Sevens series. The game will be transmitted live on the BBC Northern Ireland website. Leinster confirmed their team on Friday.

Cheltenham run out of legs up the hill as Man City escape shock for the ages 20:08
RTÉ reveal Young Sportsperson and Manager of the Year nominees 18:22
West Ham rout Doncaster Rovers to set up tie with Man United or Liverpool 17:24
First Flow runs them into the ground in the Clarence House 16:18
Rory McIlroy leads Tyrrell Hatton by one in Abu Dhabi 15:50
Here is your handy guide to sport on television this week