The Offload: Rejoice in the leadership of David Nucifora 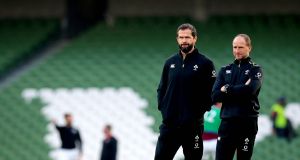 Like so many others, The Offload is ignoring the three pillars of rugby union (racism, doping and concussion) to focus on a brighter future for one and all.

Rejoice in the leadership of David Nucifora (despite his refusal to provide any sort of coherent road map). In Faz we trust, and Catty and all the other English coaches recruited by the IRFU since 2016. Fear not, 2021 promises to be a year when Ireland will rise to the usual mid World Cup cycle heights of World Cup contenders before being exposed at France 2023 due to their inability to cope with an inevitable injury toll.

Progress for Leinster will come when a starting XV includes Caelan Doris, James Ryan, Dan Leavy and Ryan Baird in the same pack (perhaps in red jerseys). Everything else can be built around these heroes of Donnybrook school days.

Munster’s phenomenal victory over Clermont Auvergne deserves to be held aloft as proof that Johann van Graan, Stephen Larkham and Graham Rowntree are building something sustainable down in Limerick.

Josh Wycherley wins the prestigious Offloader of the Week award after recovering from an early going over by Rabah Slimani to finish as the dominant scrummager in Stade Marcel Michelin (and top of the tackle count). True progress for the organisation is the sight of Gavin Coombes, Ben Healy, Craig Casey, Roman Salaona and Thomas Ahern in the Ireland training squad. And Healy eventually taking the 10 jersey off Johnny Sexton.

Ulster under Dan McFarland and Connacht under Andy Friend are improving but the next challenge is to recruit teenagers good enough to make Leinster’s academy. Jack Aungier is an encouraging example of long-term planning at tighthead prop.

All Irish rugby needs next year is a messianic figure with that “manic aggression” to lead them to unknown places. Failing that, beat the English and French in Dublin.

9 – from nine kicks at goal by JJ Hanrahan in victory over Clermont at Stade Marcel Michelin.

28-0 – with a four-try bonus point awarded to team that is declared the winner due to a Covid outbreak.

“People are leaving rugby for Gaelic football in Dublin because of this great team as well as the concerns about concussion. So many of the Dublin team now come from the southside of the city, which was rugby territory up to 10 years ago.” – Dr David Hickey, who was a decent rugby player in his time.

“We thought we were playing PSG a couple of times with all the rolling around and diving and complaining.” – Danny Care on Munster via the BBC rugby podcast

“This suggests a level of sophistication that is, in our view, far beyond the capabilities of a 15-year-old schoolboy.” – The South African Institute for Drug Free Sport implies a deeper doping problem exists.

“The sensation caused by brain injury is similar to driving without full control of the wheel. Somebody else is steering as you try desperately to wrest back control. Only problem is you have forgotten where you are going.” – Gordon D’Arcy describes concussion.

Sir Bill pulls out all the stops. As a father of “three rugby players” and a grandfather, the former England lock is convinced that rugby is safe and he is “tirelessly” working to protect modern players.

Bill’s letter was a heartfelt tribute to the young professionals forced into action to ensure the Premiership clubs could claim all their TV and sponsorship money by playing 12 games over a nine-week period. Bill is “protecting” these players despite stark warnings about the dangers of such a schedule, highlighted by Stuart Lancaster and current Bristol forwards coach John Muldoon.

“We don’t have any down time until next June,” Muldoon told The Irish Times after Bristol’s three-week off season. “We play every week. Asking guys to go to the well a couple of times in 10 days, something has to give.”

Beaumont wrote: “I want to reassure every member of the rugby family that player welfare is – and always has been – our number one priority at all levels of the game . . . I care deeply about the welfare of all players. They are the heartbeat of our sport and we work tirelessly to protect them.”

Twenty years from now it will be interesting to see if former players suffering from memory loss agree that the governing body “safeguarded” the sport.

The most scandalous assault on a rugby player occurred in the opening seconds of the 2005 Lions Test series against New Zealand. Such was the mismanagement of the fallout, by Tony Blair’s spin doctor, the Kiwis only remember the moaning. And the result. Tana Umaga even gifted us a new word; “sook,” which translates as “cry baby”.

Last week Ben Healy got hit late by Harlequins duo Alex Dombrandt and Joe Marler. They combined to injure the 21-year-old Munster outhalf but screaming foul about it only serves the narrative Welsh, English and all the southern hemisphere nations like to weave about Irish teams.

Never forget the satisfaction gained over the years from targeting a key foreign player. The hunt for Kyran Bracken springs to mind.

Healy fell victim to dirty play but not enough to sanction a red card for either English player, not during the game and not afterwards. That is hard to swallow but if you keep complaining you are only feeding a narrative that need not exist. Of course it rankles. Healy is a rare, old world outhalf revisited upon the modern game. Johann van Graan was within his rights to gripe post match but all the rest sound like sooks.

“We thought we were playing PSG a couple of times with all the rolling around and diving and complaining,” responded Harlequins scrumhalf Danny Care.

Think about why Dombrandt and Marler went after Healy. He was about to end their European campaign. They were acts of desperation to salvage their season. If you would never attempt something similar to a young English 10 then moan away.