Munster’s clash with Leinster to take place on January 23rd 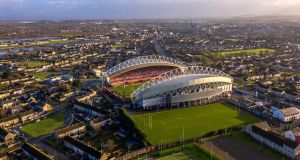 As expected, the Guinness Pro14 game between Munster and Leinster at Thomond Park which was postponed on St Stephen’s Day has been helpfully re-fixed for Saturday week, January 23rd, with a 7.35pm kick-off. It’s an ill wind and all that.

The original postponement, caused by 16 false positives for Covid-19 in the Leinster squad, can now be considered something of a blessing as the rescheduled match neatly fills the void caused by the temporary suspension of the Heineken Champions Cup over the next two weekends.

The re-arranged game between the two provinces comes a fortnight after their most recent games, namely wins over Connacht and Ulster, and 15 days out from Ireland’s opening 2021 Guinness Six Nations game away to Wales on Sunday, February 7th.

Furthermore, both sides are now likely to be at full strength, which would not normally be the case over the festive period as the respective coaches seek to juggle their resources over the course of three successive derbies which are normally in between the opening four rounds of European games.

An Irish squad of around the mid-30s will most likely be named in the day or two after this re-arranged game, which will now be both an invaluable trial match of sorts and for Andy Farrell’s Six Nations preparations. The squad will go into a bi-secure bubble for the opening two rounds of the tournament, with organisers planning for the Six Nations to proceed as scheduled. Ireland host France at the Aviva Stadium seven days after the Welsh game on St Valentine’s Day.

Leinster were willing to play their re-fixed game against Munster this coming Saturday but the more injury-afflicted home side were less inclined to do so.

As things stand, the only other Pro14 game to be rescheduled over the next two weekends is the Scottish derby between Glasgow and Edinburgh, which will take place this Saturday at Scotstoun (kick-off 5.15pm).

Breather
While generating a game for Ulster and Connacht over the coming two weeks was explored, both provinces were more of a mind to take a breather from competitive action.

No team in the Pro14 has played more matches since the resumption than Ulster, who have taken part in 18 matches in all competitions since the penultimate weekend in August (Leinster have played 16, Munster 14 and Connacht 12 in the same time span).

Furthermore, Dan McFarland’s side have played in 11 of the past 12 weekends, a heavy toll not only on the playing squad but on the support staff as well. They, more than anyone, are due a breather.

To fill the void elsewhere, it may yet be that the scheduled Welsh derbies of March 6th, Scarlets v Cardiff and Ospreys v Dragons, are brought forward to next week. Either that, or practice games between the regions are played so as to prevent Wayne Pivac’s internationals from not playing a game for four weeks.

Whereas the Top 14 are filling the Euro void by bringing forward two rounds of games, Premiership Rugby have disappointed some clubs more than most, and most likely Eddie Jones, by decreeing that they will avail of the temporary suspension of the European competitions to have a two week respite.

Exeter, for example would probably appreciate this more than most as, since August 15th, they have played 21 matches.