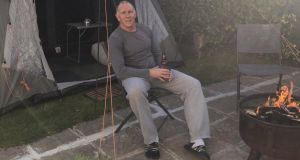 Andy Friend camping out his back garden.

Andy Friend is taking a very philosophical approach to this whole lockdown business. He describes having time, for the first time in however long, as refreshing.

“That’s something we don’t tend to have because our lives are so busy. Anyway, I’m not against it, I can tell you that.”

As if to underline the point, last Monday he posted a picture of himself on twitter sitting outside a tent in his back garden in Knocknacarra, towards the west of the city near Salthill.

“We’ve decided to go camping...at home!! It’s a childhood Easter tradition in Aust. Just lacking the sand and the wave.”

While the temperatures are normally mid-30s in Canberra during summer, Friend describes autumn (March to May) and spring as beautiful and the winters as “bloody cold - much colder than here.”

His wife Kerri comes from the Sunshine Coast, where the temperatures reach the mid-20s around now, and camping is commonplace on the beaches around Easter. “You’d put your tent up in the sand and run on sand dunes and swim in the ocean. As a young bloke we used to do similar down in Melbourne.

“In Canberra especially, Easter is the last period of camping before it gets too cold. But these last few days in Galway have been stunning.”

There was also a video of the fire burning in his back garden, under which he wrote: “The bush TV with a few country tunes tonight. A gorgeous night in Galway.”

There’s a little patch of Canberra in Knocknacarra.

“We grew up around fires,” adds Friend, who describes the two fires in the back garden of their house in Canberra - “a big chiminea, a south American BBQ with burning hickory wood” and “a cast iron Teppanyaki fire pit” where up to eight people can sit and cook their own steaks.

“In the meantime we keep the cellar door open, and you can grab a nice bottle of red. It’s a pretty good way of living mate.”

Late last summer Kerri spotted a fire pit on sale in B&Q for €25. “It’s been brilliant. We’re like the hobos of Knocknacarra mate. We go walking the streets looking for left over firewood and bring it home and burn it.”

Friend’s parents, Pru and Brian, are living in isolation in Canberra, with his older brother Dave nearby to buy their groceries. Friend’s younger brother, Greg, lives with his wife and three young kids in Sydney. “A bit of home schooling is keeping him busy!”

As for Friend’s boys, Josh (25) and Jacko (23) are in the family home in Canberra, and so making use of those two fires.

He and Kerri considered going back to Australia, but this would have meant two weeks in quarantine at either end. Besides which, Galway is home now and coaching Connacht is his job.

This being a week off for the squad, Friend had a happy hour, leadership group meeting over a beer on Wednesday with captain Jarrad Butler, Quinn Roux, Dave Heffernan, Sean O’Brien, Eoghan Masterson, Jack Carty, Tiernan O’Halloran and Colby Fainga’a, as well as manager Tim Allnutt.

They also have a coaches’ happy hour every Friday evening. “It’s the new way of living, isn’t it?” jokes Friend.

While players keep themselves fit with the aid of home-made gyms, there’s plenty for coaches to be doing as well.

He splits his day into what he calls “four main areas”, the first being “work” and staying connected with other coaches and staff.

The second is CPD (Continuing Professional Development), be it reading or seminars organised by the IRFU.

“I’m an avid reader anyway and I’m involved in a lot of webinars and zoom chats with different coaches from different sports; just continuing to learn the trade of coaching, whether it’s leadership or management or cultural. There’s a lot of learning going on at the minute.”

The third element is what he calls “me time”.

“That’s been one of the most enjoyable aspects, having that space to think. We (coaches) never stop being busy. That becomes your norm but it’s nice to have some reflection time, on conversations that you’ve had or things that you’ve listened to or been involved in.”

“Then the fourth bit of time is my time with Kerri,” he says, be it doing jigsaw puzzles, walks, cooking meals or maybe a little bit of TV. “Then, before you know it, it’s time to go to bed,” he concludes, laughing.

You’d imagine some coaches might go insane without the fix of real, live matches although Friend admit he’s had a different perception from watching re-runs, especially when on a zoom call with other coaches showing clips of Connacht.

“I got about 20 seconds through the first clip and I said: ‘Ach, can you stop it there, it’s killing me.’ I looked at it through completely fresh eyes. I remember reviewing that game and certainly not seeing what I’d seen this time. ‘Wow, how did we miss that?’ How did we miss not seeing how static we are there?’ Or that we didn’t look up and didn’t see a short side there? Or we didn’t play to the space on the openside there?

“That’s probably been my big learning from this whole thing, that when we get back to ‘normality’ we’ve got to make sure that we give ourselves time and space to clear the mind as best we can. Things do get busy. I get that. But I think we’ve used busy as an excuse for so long and the fresher we can keep our minds the more clearly we see things, and we’re seeing things for what they are rather than the lenses we believe are meant to be there.”

Last season, Friend’s first, Connacht accumulated five more Pro14 wins and 22 more points than in 2017-18, qualifing for both the play-offs and this season’s Heineken Champions Cup.

This season, Connacht performed credibly in Europe and currently lie fourth in Conference A, two points behind Scarlets, whom they were due to host before the Pro14 was suspended.

That said, Friend accepts there have been more lows this season than last, a “horrific injury list” contributing to five successive defeats.

“But in order to grow you’ve got to be uncomfortable and I do believe top three was within our reach,” said Friend, while six or seven wins from their last eight might have earned a home quarter-final.

As things stand, Connacht are in line for a home play-off against the Dragons to qualify for next season’s Heineken Cup, so their season hangs “up in the air” more than most.

Aware that the Connacht squad “has to be bigger and stronger next season”, either way whenever they return to action he believes this period will tell the province much about themselves.

“When no one’s watching that’s your true culture, and no one’s watching at the moment. We actually can’t physically watch. But the players and staff are doing their own CPD stuff and we have enormous buy-in across the whole group to use this period really positively and come out of it in a better position than we entered it.”

Be it his native Australia, England, Japan and now Ireland, Friend is a well travelled coach but his attachment with Connacht is all the deeper after pitching his tent here at this point in history.

Amid these “weird times” he believes Connacht’s three pillars - ambition, belief and community - have been reinforced, adding: “I think the community part of it at the moment has been incredible, the way our players and our marketing department have reached out to, and supported, the community, through this period because, as Leo Varadkar said, we’re all in this together.”

On his morning walks Friend has noticed people are now more respectful of each other whereas previously they “just had their heads down.”

“I think there’s more awareness of what’s going on around us at this point in time. It’s a brilliant reset button for us as a race of people and I feel, certainly here in the west of Ireland, there’s a uniqueness to the way you live here anyway. This is just probably adding to that and making it even more special.”

New Zealand could allow ‘sold out’ sports stadiums next week 08:31
Jacob Stockdale on dealing with online abuse; Seán Moran reminisces about what we’re missing 06:52
Red card replacements among new laws in New Zealand 06:17
Seán Moran: Summer’s mosaic slips away one small tile at a time 06:00
Jacob Stockdale gives keyboard warriors the slip in textbook fashion 06:28
Here is your handy guide to sport on television this week