Champions Cup may be trimmed by two weekends under proposal 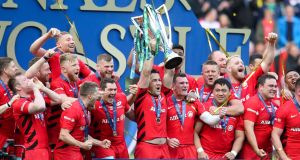 Saracens celebrate their victory over Leinster in the 2018-19 Heineken Cup Final at St James’ Park in Newcastle. Photograph: Andrew Fosker/Inpho

The participating unions and federations in the Heineken Champions Cup are considering ways of trimming two weekends off the existing format from next season onwards.

There is a general consensus that the rugby calendar is overcrowded, not least given the need to rearrange the four outstanding games from the 2019 Six Nations and potentially much else into the 2020-21 season. However, the Champions Cup’s current accord, including broadcasting and sponsorship contracts, runs until the end of the 2021-22 season, which makes changing the format before then complicated if not impossible.

Nonetheless, a couple of ideas for revamping the tournament are being considered. One would be to expand the competition from 20 to 24 teams, but into eight groups of three teams apiece to play each other on a home and away basis, with the winners progressing to the quarter-finals.

Another is for the tournament to be reduced from 20 to 18 teams, with six pools of three playing each other on a home and away basis, from which the half-dozen group winners and the two best runners-up would advance to the quarter-finals.

If this comes to pass, the likelihood is that the competition would begin with the first two rounds in their traditional December slots as things stand. In any case, trimming the competition would also facilitate a more aligned, global season and this proposal is understood to have been put forward by the French clubs.