Leinster hope to be back in training in the middle of May, Jack Conan fully fit again 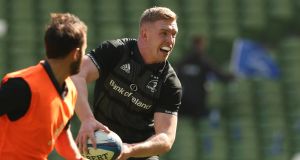 “I would expect when we can get back up and playing, it’s more than likely he’s going to be available at that time.”

Live rugby cannot return soon enough, and whenever Leinster do resume playing competitively again this momentous event will be given even added resonance by the sight of Dan Leavy being among their number.

The 25-year-old Leinster and Irish back-rower was a star turn in Ireland’s 2018 Grand Slam campaign and his province’s march toward a first double of Heineken Champions Cup and Guinness Pro14 until he suffered a serious knee ligament injury in their epic quarter-final win over Ulster at the Aviva Stadium on March 20th, 2019.

After two operations, Leavy is showing no ill effects from a return to running according to the Leinster head of operations Guy Easterby, who has forecast that whenever rugby does return so too will the 25-year-old.

“Dan, has done an unbelievable job along with Karl Denver, who has been the physio doing his rehabilitation with him. They’ve done a fantastic job as a team together and I’m sure they’re missing each other. I know they’re video-calling quite a lot to look into each other’s eyes,” joked Easterby.

“A lot of that he can do on his own. It’s not like he hasn’t gone through the processes in terms of a weekly schedule of what his rehabilitation looks like. Committing like he has throughout the whole process, he’s been fantastic. It was obviously a very significant injury.”

“He isn’t a million miles away at all, Dan, and I think it’s just the final pieces and making sure he’s being kept in touch with, building up his strength a bit more.”

“He’s getting the running under his belt and he’s not getting a bad reaction to that, so I’d say it’s very positive from Dan’s end and I would expect when we can get back up and playing, it’s more than likely he’s going to be available at that time.”

As to how soon that may or may not be, Easterby was no wiser than anyone else.

“It’s very difficult to determine. The longer this goes on then the longer a pre-season you might need but we are running a full programme for our players currently, albeit they are training on their own and there are no rugby elements to it. But they are training away with their running and weights sessions. It’s not an exact science and different players will react differently, as will be the case in a normal pre-season. It is a difficult one to put a number on but it is a matter of weeks rather than months, that is the reality.

“We haven’t got a particular date in kind. I’ve got to give credit to Pro14 and the IRFU in terms of working around possible plans in terms of starting dates but there is so much uncertainty as to when we might be able to get up and running again.

“The plan at the moment is a return to some sort of collective training around mid-May but, again, that’s something that might change from day-to-day never mind week-to-week. That is everybody coming in again en masse and listening to Simon Harris last night he was saying that the social distancing piece isn’t just going to disappear when the current lockdown restrictions are lifted.

“Everything we do will be guided by the government and their guidelines. That’s a very soft plan. We would love to get the season finished in some way, shape or form. We made it very clear to all the bodies involved that we will do whatever is involved to play our part. There are extra challenges involved with our league in that you have to dash off on a plane to play games which the Top 14 or Premiership wouldn’t have.”

Easterby confirmed that playing behind closed doors is a “realistic option”, adding: “Again, it’s about how quickly the social distancing piece comes into play but the longer the players go without playing the keener they will be.

“It is a bit of a guessing game. At Leinster we are prepared to do whatever it takes within the guidelines. Players want to be playing so it is important that we consider them. Nothing is ruled in and nothing is ruled out at this point.”

Leinster also confirmed that Jack Conan has returned to full fitness after fully recovering from the foot injury that ended his World Cup.