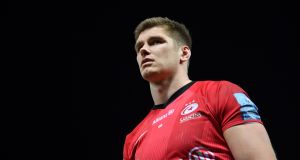 Owen Farrell, the England captain, is set to defer almost £300,000 (€345,000) in wages as part of drastic measures adopted by Saracens owing to the coronavirus crisis. Fellow England players such as Maro Itoje and the Vunipola brothers are set to be similarly affected as the disgraced Premiership champions fight to stay afloat.

Saracens have asked all players earning more than £75,000 (€86,000) to defer wages until the start of next season - currently scheduled for September - and for Farrell that means a deferral of around 90 per cent of his wages for five months. The measures would lead to the majority of their squad affected, with wages deferred, and suggest a degree of scepticism at Saracens that their current Premiership campaign will be finished.

The club announced that deferred salaries would be repaid over an 18-month period but it is unclear whether they would be included in this season’s wage bill or for the 2021-22 Premiership campaign, assuming Saracens are promoted next season.

Saracens – already condemned to relegation due to their salary cap breaches – have already imposed a 25 per cent pay cut on their squad as part of a blanket move by Premiership clubs that was strongly criticised on Wednesday by the Rugby Players’ Association(RPA). Saracens also became the latest club to announce they are taking advantage of the government’s furlough scheme.

Saracens did not say whether the proposed wage deferrals have been formally accepted by the players but they are said to be “overwhelmingly supportive”. Itoje, who has been the subject of a lucrative loan offer from Racing 92 for next season, said: “In order to see this through the whole organisation needs to pull together and do what we can for the future of Saracens and our individual careers within the sport.”

Sympathy for Saracens players may be in short supply given the salary cap scandal but the chairman, Neil Golding, insisted the measures were necessary to keep the club afloat. “We understand this is really tough for everyone, but the reality is that the only way to survive this unprecedented situation as a club is to make these adjustments.”

The RPA player liaison officer and former chairman, Christian Day, meanwhile, has hit out at the clubs’ handling of the blanket 25 per cent cuts. As revealed by the Guardian, clubs are likely to face a number of claims for unlawful deduction of wages, with players on low salaries or out of contract at the end of the season unhappy with how the reductions were imposed. “All clubs have done this their own way,” Day told the BBC. “There was no discussion with us beforehand and no central discussion from Premiership Rugby either.

“What we would have preferred from the start was a lot more dialogue and understanding which is what seems to be happening in football currently. They are not just saying, ‘This is going to happen’, there is instead a discussion of why it needs to happen and how it is all going to work.” – Guardian

1 Rory McIlroy puts integrity ahead of glory in US PGA second round
2 Michael Schumacher’s family share rare update on condition
3 World Cup fever has a way of bringing people together
4 Meath's time to even the score
5 When Mike Tyson bit Evander Holyfield: 20 years on
Real news has value SUBSCRIBE