Unbeaten province had lucrative dates lined up with Munster and Saracens 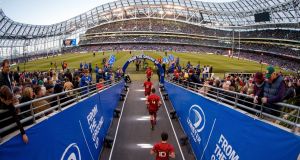 Leinster were due to meet Munster at the Aviva Stadium on Saturday. Photograph: Bryan Keane/Inpho

No team had set up a more rewarding and lucrative finale to the 2019-20 campaign than Leinster, unbeaten as they were after 19 wins in 19 competitive games this season. Accordingly, few teams in Europe are liable to take a bigger financial hit than the reigning Pro14 champions should the current season be abandoned due to the Covid-19 pandemic.

This Saturday, Leinster were scheduled to host Munster in their annual derby at the Aviva Stadium and having both that game and their Heineken Champions Cup quarter-final against Saracens at the same venue cancelled would most probably cost them around €1.5 million in lost gate receipts.

Add in two more home games against Zebre and Cardiff along with, almost certainly, a Pro14 home semi-final, and Leinster could miss out on around €2 million in total, including commercial add-ons and bonuses.

“I wouldn’t want to get into exact figures, but it would be a lot of money,” admitted Guy Easterby, Leinster’s Head of Operations said yesterday. While Leinster do not budget for the estimated €500,000 accrued from a European home quarter-final, it is a bonus they have earned eight times in total and this would have been their fourth in a row.

“It is very important to us to try and achieve that. Then we have the Munster game which is an important part of our financial model,” said Easterby who pointed out that but for the World Cup “that match would normally take place in October and the money banked so to speak.” Unlike the European quarter-final, Leinster would keep all the gate receipts from a home Pro14 game such as Munster at the Aviva.

“There is still hope among a lot of us that there might be some conclusion to the season. Whether those games can go ahead, again, it’s probably looking less likely but we’re not prepared to give up on it.”

While there had been “small discussions” around the doomsday scenario of no more rugby in this calendar year, Easterby maintained: “The other end of that argument is there could be rugby in two to three months. No one actually knows. All the discussions are just so unreal at the moment. No one knows the answer but we do have to be proactive in terms of how we approach things.”

In all the discussions involving Leinster, through their chief executive Mick Dawson, along with the IRFU, the Pro14, EPCR and World Rugby, Leinster and the provinces fully appreciate that accommodating Ireland’s postponed 2019 Six Nations games, a potentially rearranged July tour and the November internationals, hold primacy.

“We understand how important those high value games are to us regaining some financial stability,” said Easterby, who confirmed that some interprovincial derbies have been considered as a means of filling a void should a gradual lifting of restrictions permit.

Easterby is a key figure in the province’s recruitment of players, but he maintained that there were no plans to supplement a squad that was largely nailed down for next season already.

That said if the 2019-20 season does not resume, and certainly not before the end of June, then Rob Kearney and Fergus McFadden will be out of contract.

Interestingly though, Easterby admitted: “The last thing we’d want to see for people who have been unbelievable servants to Leinster Rugby to finish on a note like this. We’ll be working with those individuals as this plays out and as befits the service they have given to the club.”

On one positive note, whenever rugby does return it will feature Dan Leavy, who is back running again after undergoing two operations on the damaged knee ligaments he suffered in Leinster’s Heineken Cup quarter-final win over Ulster in March last year.

Jack Conan, having recovered from the ankle injury which scuppered his World Cup, was due to make his comeback on Leinster’s cancelled South African safari, while other long-term casualties Rory O’Loughlin and Ed Byrne have also returned to full fitness.