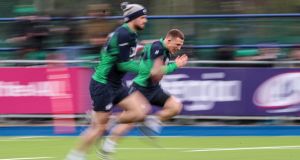 Further announcements after May 5th will give us the lie of the land. Photo: Tommy Dickson/Inpho

The summer is rugby’s wedding season. It’s the one time players are on holidays together and it’s a juggling act to make sure weddings don’t clash because the window is so narrow.

Last summer we went to John Ryan and Zita’s wedding in Barcelona, then to one of Liz’s friends in Italy, and I went to Dave Foley’s wedding. Ian Keatley did buck the trend by getting married on New Year’s Eve.

Three weddings were scheduled for this summer’s off-season, and ours was one of them!

Myself and Liz were due to get married on August 7th in Monaghan. I proposed in July, 2018, and we booked the venue the following September. We didn’t want to rush it and as it turned out there was only a three week off-season because of the World Cup. We’ve since booked a band and a photographer.

Last Monday the venue touched base with us. I’d already known that all weddings up to the end of June had been postponed due to the restrictions, while everything from July onwards is up in the air.

A few of the couples who were due be married around the same time as us have already postponed theirs, on the basis that at the very least the venue will probably not be allowed to have 250 guests present, more like 100.

Trying to whittle down our guest list made it more real that our wedding wouldn’t be what we’d envisaged. The hotel are flexible and are putting no pressure on us. We said we’d wait until the next Government announcement on May 5th, see where that brings us, and make a decision later next month.

Like everyone else we’re certainly listening to government announcements more than ever. Assessing Leo Varadkar’s comments one day with what Simon Harris or some specialist says the next, you can become a little lost. They’re managing a variety of things, such as limiting the damage caused by the coronavirus pandemic while also maintaining both the public’s discipline and hopes.

Extending the latest lockdown by another three weeks probably pitched it right. If they’d said “12 weeks” at the start, people might have gone insane. They’re maintaining a balancing act to ensure the country doesn’t have a meltdown while also giving accurate information. So there’s no point in speculating what things might be like in early August now.

A reduced guest list is almost pointless, as there’s now another complication. If the rugby season is back in action over July and August, we probably won’t be able to drag 20 or so players away from a re-arranged match.

Hopefully by mid-May we’ll also have a better idea of when the Pro14 might be resuming, if at all. Once we have as much information as we can gather, then we can chat with each other and our families, and I can chat with Johann [Van Graan]. Even if the season is being completed in summer, as Munster are not in Europe we might have a down week that week. Who knows? But right now, like everyone else, we haven’t a clue what the first week in August might hold. There’s no point in making a call now.

Next year is complicated too as plenty of couples have had to postpone weddings in March, April, May and June, and moved them to 2021. One of the other players has already told me he’s pencilled in another date for next summer so, if it comes to it, we have to avoid that weekend.

Although the venue have been brilliant, it has been stressful, probably more so for Liz than for me. But then we remind ourselves of people we know who are sick and in hospital, or going through tough times, and that shifts your paradigm.

We have, at least, avoided one other complication. A few weeks ago myself and Liz had agreed I’d go out with my four groomsmen for a tux fitting, as well as a meal and a few drinks, before we’d book the honeymoon the next day. However me and my groomsmen went a bit harder that night than we should have and I wasn’t in the right state to book the honeymoon the next day! Just as well though.

This week, I also had a couple of chats with my grannies. Granny McDermott is ultra-active, always on the move, always out walking. Myself and Liz would see her in Dún Laoghaire, flying along the coastline or setting out for walks on the pier. It’s very, very tough for the older generation who are still active but are forced to live in lockdown.

It’s not as tough for my Granny Conway, who is in the same estate as my parents and has a carer, but Granny McDermott has been confined to the house for six weeks. My mum, aunt and other people visit her, and chairs are positioned at either end of the driveway. But there’s only so much you can chat about, and not being able to venture out or go to mass, is so restrictive for her and so many others like her.

She also knows her rugby and gets The Irish Times delivered, so lots of love to both Granny McDermott and Granny Conway, and all the grannies and granddads out there.