Dan Carter to return to Christchurch as an Auckland Blues player 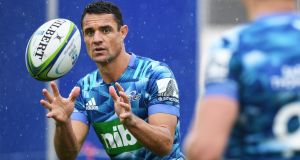 Dan Carter is Crusaders royalty, but for a hardcore fan like Graham Paterson, supporting his team on game-day is “business”. So when the Blues visit Christchurch for the top-of-the-table Super Rugby Aotearoa clash on Saturday night, Carter, if he features, will be wearing the wrong jersey, and there will be no room for sentiment.

Although we won’t know until Thursday if Carter is to play, a slot on the Blues’ bench seems a good bet. The three-time World Rugby Player of the Year’s calming presence would give the improving visitors – who have won seven in a row since they lost to the Crusaders in February – a huge psychological boost. It would also make the Crusaders wary, given they know the 38-year-old’s talismanic influence better than most.

Carter scored 1708 points from 141 appearances for his old team, at just over 12 per game. Paterson saw the majority of them, last missing a game in Christchurch in 2006. Prior to that, he estimates he went “probably about 20 years” without missing one. That means Paterson witnessed Carter’s debut against the Hurricanes in 2003, and his final appearance on home turf, against the Queensland Reds, 13 seasons later.

“He was a great player for us over a long period of time, but that’s all over now,” Paterson says. “We’ve moved on. Richie Mo’unga is doing a great job, and I’m sure he will play as well as he usually does, whether Dan is playing or not.” Carter won three Super Rugby titles as a Crusader, a feat already matched by 26-year-old Mo’unga.

Paterson, a regular at the Crusaders’ training base and well known to the players, was thrilled to receive a phone call from Mo’unga during the recent Covid-19 lockdown, just to check he was doing ok. Andrew Mehrtens, the first dominant five-eighth for the Crusaders, also looked out for him after games, once shielding the often outspoken fan from criticism in the aftermath of a family bereavement.

“He (Mehrtens) will always be number one for me, but Dan did a fantastic job for us, and Richie has followed on from them both.”

Carter might be gone, for now, but he’s definitely not forgotten, Paterson says, pointing to the 1500 people who turned out to watch the former All Black run around just south of Christchurch last weekend, when he tuned up for Super Rugby by playing 80 minutes for his boyhood amateur club, Southbridge. Last month, Carter auctioned off one of the 111 Test jerseys he won during his celebrated All Black career to raise $NZ 21,000 to help that club cover its Covid-19-related costs.

Eighteen players have played more than 100 games for the Crusaders but Carter, who is ninth on that list, would be the first centurion to play against the team after having left. Even so, Paterson expects local fans to give him a warm reception.

“It might have been a bit different in the old days, with a parochial crowd and a packed embankment at Lancaster Park,” Paterson acknowledges. “If he’d played for Auckland then, Dan would have copped a fair bit, but times have changed. Things are more reserved. I’m sure most people will be pretty good if he does play.”

Even if some do choose to boo, Paterson says the rest of the country shouldn’t make a big deal of it. “If it happens, there will be a bit of tut-tutting, but it’s part of sport. Look what happens in English football when a star player goes and plays for a rival club.”

This weekend’s game also contains another compelling homecoming narrative. Blues coach Leon MacDonald, who recruited Carter, is a celebrated Crusader himself, with an even more impressive Super Rugby CV. The second highest try-scorer in Crusaders’ history (Carter is third), and the veteran of 122 games, MacDonald won six titles in 12 years on the playing staff and contributed further as assistant coach during Scott Robertson’s maiden title in 2017. MacDonald had been offered a new contract and his departure, and subsequent recruitment by the Crusaders’ arch-rivals a year later, did turn a few heads in Christchurch.

Paterson understood MacDonald’s decision: “we’re used to losing coaches to other teams.” But while he bears no ill will he also hopes any success that comes MacDonald’s way doesn’t come at the Crusaders’ expense.

The Blues turned to MacDonald last year to try and turn around the side’s flagging fortunes. Although Covid-19 has prevented him from returning the side to the Super Rugby play-offs for the first time in nine years, the upturn in fortunes from his maiden season in charge has been significant. His ideas have taken hold and the values and management techniques he learned through his time as a Crusader have begun to take root.

It still might not be enough to allow the Blues to overturn a grim statistic which sees them without a win in Christchurch for 16 years, but the presence of two of Canterbury’s favourite sons within their camp should certainly make things interesting. - Guardian