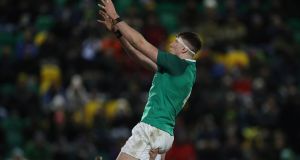 The tallest of the academy secondrows is Waterford-born Thomas Ahern at 6ft 9in. Photograph: Billy Stickland/Inpho

It’s a little under nine years ago that Leinster Rugby embarked on a project called ‘Route 6’6”’ to try and entice young men between the ages of 17 and 23, standing 6ft 5in or taller, with or without previous rugby experience to come to a screening day. The date was Saturday, October 8th, 2011.

The then Leinster Academy manager Collie McEntee –- he is now the IRFU’s director of rugby development – and former Lions, Ireland and Leinster secondrow Malcolm O’Kelly were charged with evaluating the attendees with a particular interest on those who might be crossing over from another sport.

Irish rugby has never been heavily populated with tall players, a reflection of the gene pool and the fact that the sport was fourth choice as a field sport in terms of the numbers. There were exceptions and exceptional years and in the latter respect the Ireland squad that participated in the 1999 Under-21 World Cup in Argentina highlighted that fact.

The back five of the pack in a game against New Zealand contained at one point Bob Casey (6ft 7in), 1998 Under-19 World Cup winners Aidan Kearney (6ft 5in) and Donncha O’Callaghan (6ft6in), Leo Cullen (6ft 6in) and Mick O’Driscoll (6ft 5in) – but this was the exception rather than the rule in terms of a stack of “tall timber” down through the years.

Devin Toner (6ft 11in), Malcolm O’Kelly (6ft 8in) and Rory Sheriff (6ft 7in) were a brief example of others to stand tall at age-grade level for Ireland and in the case of Toner and O’Kelly they progressed to senior international level.

A study in 2016 found that in the years between 1914 and 2014, the average height for an Irish male aged 18, had increased by 4.7 inches to 5ft 10in so it’s perhaps little surprise that Irish rugby is starting to see a greater proliferation of taller players and that’s reflected in a general sense in the four provincial academies.

Ireland rugby teams are more consistently bridging a historical shortfall in height terms. Looking specifically at those listed as secondrows by the provinces, and strictly according to their data, the tallest is Waterford-born Thomas Ahern at 6ft 9in, a standout player in every way for the unbeaten Ireland Under-20 team in this season’s Six Nations championship.

Ahern, who celebrated his 20th birthday last month, demonstrated his athleticism with a superb try against Scotland and then followed that up with a brace in the victory over England at Franklin’s Gardens. His lineout and restart work have also been hugely impressive and he’s rightly been heralded as a player of great potential.

In Leinster, Jack Dunne (21), happily recovered from a shoulder injury, stands 6ft 8in and the Trinity student has seen a little Pro14 action in recent weeks. Last season’s Under-20 Grand Slam captain Charlie Ryan (21) – he took over from the injured David Hawkshaw during that campaign – is 6ft 7in, the same height as Wexford’s Brian Deeny (20). The latter is in his second season with the Irish Under-20s, a memorable highlight the try he scored against England in last summer’s World Cup in Argentina.

Ryan Baird (20), man of the match and scorer of three tries in Leinster’s recent victory over the Glasgow Warriors, showcased his admirable talent in that match. A product of St Michael’s, he was selected as one of four development players by Ireland head coach Andy Farrell for a pre-Six Nations training camp in Portugal and this week was included in an extended national squad for training in preparation for Saturday week’s game against France in Paris.

Oisín Dowling (22) can play secondrow, which he has done for his club Lansdowne and Leinster, but the 6ft 5in inch forward is equally at home in the backrow at blindside flanker. The same can be said of Ulster academy prospects, Jack Regan (22, 6ft 5in) and Mathew Dalton (21, 6ft 5in).

Regan, a son of former Offaly All Ireland hurling winner, Daithí, was a member of the Leinster Academy before switching to Ulster, for whom he made his debut against Leo Cullen’s side in a Pro14 match at the RDS in December.

Dalton, Dowling and Regan are former underage internationals as is Connacht’s Niall Murray (20, 6ft 6in), a valued member of last season’s Irish-20s Grand Slam winners, who made his senior provincial debut against Leinster in January, and the former Roscommon minor footballer has since added to that tally including an appearance off the bench against Montpellier in the Champions Cup.

Height alone is nothing more than a useful addition – there have been plenty of modest-sized, relatively speaking, secondrows that have served their country superbly – but within this group there are several brilliant prospects; strong, mobile athletes with great skill-sets. Continuing to unearth players with those attributes is more important than finding players that are tall; although to discover players who fulfil all criteria is even better.