Trick or treat: Ireland set for Halloween showdown with France in Paris 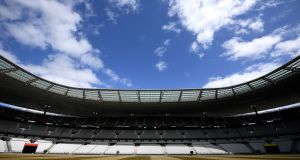 Ireland are set to play their Six Nations match against France at the Stade de France on Saturday, October 31st. Photograph: Franck Fife/AFP via Getty Images

Ireland’s final two fixtures in the 2020 Six Nations Championship are set to take place in October having been postponed due to the Covid-19 pandemic last March. Six Nations Rugby is expected to officially confirm the rescheduled matches next week including kick-off times.

Andy Farrell’s side will host Italy at the Aviva stadium on Saturday, October 24th and will then travel to Paris for a Halloween fixture on October 31st, where they will face France. All of the fixtures are contingent on government approval in the country in question with regard to health and safety regulations that pertain at the time in relation to Coronavirus.

Attendance restrictions will also be clarified by the respective host countries. Assuming a reduced capacity at the Aviva stadium, two-metre distancing would allow just 8,200 spectators to attend, while a one-metre gap would permit 18,500 to be present at the Italian game in Dublin.

World Rugby vice-chairman and French Rugby Federation (FFR) president Bernard Laporte suggested on a radio show in France that the national team could play five or six Test matches between late October and December 5th. He also said that France would play a warm-up fixture for their Six Nations game against Ireland the previous week, possibly against either Scotland or Wales.

Laporte is currently in re-election mode and hoping to retain his current position as FFR president – Florian Grill is running against Laporte for an election that takes place on October 3rd – and he has been making overtures towards the clubs in particular. He has suggested that the upcoming Test schedule would help to raise revenue for the 1,900 rugby clubs in France.

What he has yet to manage is to broker an agreement between the League Nationale de Rugby (LNR) and the FFR with regard to the release of players for any upcoming internationals. The French Top 14 clubs are thought to be unhappy with players being absent through a Test window that stretches from October 24th to December 5th.

There is no confirmed shape to what that particular fixture schedule might look like post the Six Nations rearranged matches with discussions ongoing at World Rugby level.

Meanwhile, the Aviva stadium will be one of the venues that EPC Rugby will consider to host the postponed 2020 Heineken Champions Cup, refixed for the weekend of October 16th-18th.

The tournament organisers explained that the Champions Cup and Challenge Cup finals would no longer go ahead in Marseille “due to uncertainties created by the Covid-19 pandemic” and that the French city would instead host those tournament deciders in 2021.

Supporters who bought tickets for either or both matches can hang onto them as they will be valid for the finals in 2021 or claim a refund before July 31st. The tickets will not be valid for whatever venue ERC Rugby decides upon to host the 2020 final.

There are two likely criteria that will help to determine the final venues; what teams may contest the deciders – organisers will have to take a punt in this regard – and secondly that the stadiums are not too big if the games have to be played behind closed doors, or too small if there are no restrictions to capacity. It is probable that the Champions and Challenge Cup finals won’t be in the same stadium, breaking a sequence that goes back to 2011.

While EPC Rugby are seeking expressions of interest to host, looking at the quarter-finalists, Ireland, France and England would have strong claims with the Aviva stadium probably better size-wise than Twickenham or the Stade de France if trying to hedge for all possibilities in attendance terms. Indeed it’s more likely than smaller venues in France and England would be preferred.

The tournament organisers may elect to wait until after the quarter-finals on the weekend of September 18th-20th before announcing a shortlist of options as potential hosts for the Champions and Challenge Cup Finals.