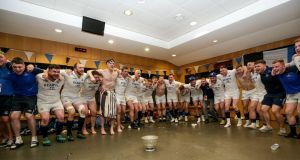 The slew of postponed fixtures from men’s, women’s and Under-20 Six Nations championships, Pro14 fixtures involving Italian clubs, the French Top 14 matches being deferred or played behind closed doors and the threat facing the European Champions Cup next month is disappointing from a sporting perspective but a minor consideration when weighed against the threat to public life from coronavirus.

While the respective tournament organisers try and figure a way to shoehorn postponed fixtures into an already crammed rugby calendar in the midst of an escalating health issue, the All-Ireland League (AIL) presents an opportunity for those looking for a live rugby fix. It’s worth the investment.

The club game in Ireland has long since being superseded by the provinces in terms of attendance but maybe this weekend can commandeer the spotlight. A number of the most talented young players in the country will be in action including a number of those who have helped the Irish under-20s to an unbeaten start to the Six Nations.

Looking specifically at Division 1A over the past five seasons, it has proved a fertile development environment for many of the current Ireland senior team, including recent new caps like Caelan Doris (St Mary’s College), Ronan Kelleher (Lansdowne) and Max Deegan (Lansdowne).

In examining the last five winning Division 1A teams it is striking the number of players that have gone on to professional careers. Lansdowne won the title in 2015 and the starting team in that final – Tadhg Beirne was a replacement – included Cian Kelleher (Leinster), Tom Farrell (Connacht), Tom Daly (Connacht), Mark Roche and Ian Fitzpatrick (Ireland Sevens), Adam Griggs (Ireland Women’s head coach), Peter Dooley (Leinster) and Aaron Conneely (Connacht).

Clontarf were the champions in 2016 in what loosely might be termed, “the Joey Carbery final”, in which the Munster and Ireland outhalf produced a stellar performance but that side also included centre Conor O’Brien (Leinster), hooker Bryan Byrne (Leinster, now on loan to the Bristol Bears), and number eight, Michael Noone who played for the Leicester Tigers.

Hooker Aaron Dundon (Leinster and Ulster) and tighthead prop Vakh Abdaladze (Leinster) were on the bench for their victory over Cork Constitution. The Cork club exacted their revenge for that final defeat by beating Clontarf in the 2017 final.

Shane Daly, one of the brightest young prospects in Irish rugby who continues to underline that ability with Munster, was at fullback, Tomas Quinlan (Munster), who enjoyed some time at Narbonne and 24-year-old Munster prop Liam O’Connor were members of that starting Con team.

Lansdowne won in 2018 with Dooley and Conneely, again part of the run-on team in the final – Fitzpatrick was among the replacements – while they were joined by current Ireland Sevens players, Foster Horan and Adam Leavy with Mark O’Keeffe, who is now playing professional rugby in America, on the left wing.

Con, who have competed in four of the last five finals since the league reverted to a playoff format in the 2014-2015 season, are the reigning champions, having once again beaten Clontarf in a final. They had seven survivors from the team that won in 2017 including Daly.

Only once in this timeframe has the club that finished top of the league, failed to successfully negotiate the playoffs and claim the title. Lansdowne topped the table in 2017 on points’ difference but lost to Con in a semi-final. Incidentally flanker Joe McSwiney has started two Division 1A finals with different clubs, winning with Lansdowne (2015) and Con (2019).

The Cork club is in the box-seat in the current campaign, winning all 14 games, holding a 12-point lead in the table over their closest pursuers Garryowen. W ith four matches to go in the league they are all but guaranteed a home semi-final barring a freak set of results. Four finals in five years with two outright wins is a reflection of their consistent excellence under head coach Brian Hickey.

There is so much to play for at the top and bottom end of the table this weekend, starting with the friday night lights game between Dublin University and Lansdowne at College Park (8.0). The game is scheduled to go ahead as things stand.

While Thomas Clarkson and Alexis Soroka are likely to be rested given recent exertions, their Ireland under 20s team-mates, Max O’Reilly and Joe McCarthy could play, so too Leinster’s Jack Dunne. Lansdowne, under Mark McHugh in his first half a season as head coach following Mike Ruddock’s departure to the Ospreys, have shown a gritty resilience to eke out four single-point victories in their last five games.

They sit on the bubble in terms of the playoffs in fourth place but there is something to play for across all five fixtures – four on Saturday – in Division 1A adding a competitive spice to complement the opportunity to watch firsthand a plethora of future professional players and in several cases those that seem destined to go on and play for the Ireland senior team.