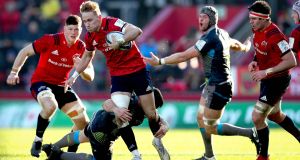 Munster face an important game in the context of the Guinness Pro14 race to the playoffs when they host the Scarlets at Thomond Park on Saturday.

The Irish province, in second place, hold a three-point lead over the Welsh visitors with both pursuing Conference B leaders Edinburgh.

The only team to have beaten Johann van Graan’s side in the league at Thomond Park over the last three seasons are Leinster. That’s an impressive record that Munster will be looking to keep intact.

Ireland head coach Andy Farrell has realised Jack O’Donoghue and Chris Farrell back to the province, a significant fillip ahead of an important game.

The 26-year-old O’Donoghue has been in consistently excellent form this season, playing right across the backrow and adapting superbly to whatever role has been demanded of him. His presence in the extended national squad is a reflection of those performances.

His work in defence, especially the lineout maul and the breakdown where he has managed to win more turnovers (seven) in league games than any other Munster player, supplements qualities like athleticism, handling and lines of running.

Two Munster players though have racked up standout statistics (Opta) in the Pro14, fullback Mike Haley and number eight Arno Botha. The 25-year old Haley, who made his Ireland debut in a World Cup warm-up match against Italy last August, leads the way in defenders beaten (23), metres gained (540) and also offloads (10).

His counterattacking inclination and ability to pick his way through the chasing line has been invaluable to his team. Haley has started 14 matches this season scoring two tries.

Former Springbok Botha is Munster’s leading try scorer with six, a figure that represents 15 per cent of the province’s overall tally of 39 in his 15 Pro14 matches. The in-form JJ Hanrahan has weighed in with a hefty 92 points (29 per cent) of the 323 his team has notched.

In terms of the team collective Munster have the best lineout in the league with a 91 per cent success rate. It’s fair to say that one player who will have dominated Munster’s analysis ahead of the game is Scarlets’ wing Steff Evans, who can play fullback, wing and centre.

The 25-year-old, who won the last of his 13 caps for Wales against Ireland in a World Cup warm-up match last summer, is his club’s most potent attacking figures according to the numbers having made most clean breaks (13), beaten more defenders (37) and having offloaded (10) most.

On the other side of the ball the Monte Carlo born, former Wales Under-20 international Josh MacLeod has more turnovers (19) than any player in the league. Munster know that a victory this weekend will give them a little breathing space over their closest pursuers.

Six of the extended Ireland squad feature across the statistics categories for a Leinster squad unbeaten in all tournaments this season, the try-scoring stakes led by hooker Ronan Kelleher with seven (joint second) in six Pro 14 matches and eight in nine matches. His contribution represents 11.8 per cent of Leinster’s tally of 59 tries at an average of a smidge under five per match.

As Kelleher demonstrated in his cameo off the bench at Twickenham he possesses all the qualities required to be a top-class Test match hooker. Making it something of a family affair is brother Cian, the wing having made more clean breaks (12) than any of his teammates.

This is rendered more impressive by the fact that Cian has started four of just seven matches with a strike-rate of better than one try every two games. Earlier in the season he managed a brace in Scotstoun against Friday night’s opponents, the Glasgow Warriors.

Max Deegan, who won his first cap against Wales recently, was one of four Leinster players released from the national squad camp this week, along with fellow backrow Will Connors, scrumhalf Luke McGrath and wing Dave Kearney. Deegan has the second highest successful carries in the league but it is his all-round game that has been striking.

He’ll be hoping to get an opportunity in his favoured position of number eight, potentially alongside Connors whose tackling (133) has been a conversation point throughout the season, although in his most recent appearance at the RDS he scored his first and second tries for Leinster in a win over the Cheetahs.

No one will be surprised that James Lowe (nine) leads the offloads category while Ross Byrne, Hugo Keenan, Robbie Henshaw and Caelan Doris are the others to excel.