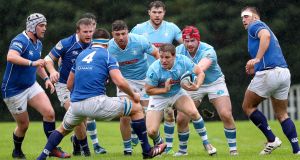 Terenure College cruised straight to the top of Ulster Bank League Division 1A thanks to an eye-catching 24-0 bonus-point victory over Dublin University at College Park.

Buccaneers’s first game back in the top flight after a 10-year absence ended in a 19-10 defeat to Lansdowne, last season’s table toppers. Conor McKeon and Charlie Rock, a debutant for Lansdowne, both came off the bench to score tries at Dubarry Park, with the visitors’ outhalf Scott Deasy kicking 14 points from the tee.

St Mary’s College scored the only points of a tightly-contested second half to run out 13-7 winners over Garryowen at Templeville Road. Flanker Mark Fallon weighed in with a 46th-minute try and outhalf Sean Kearns added a subsequent penalty as Mary’s new head coach Peter Burke enjoyed a winning start.

Ireland Sevens stars Jimmy O’Brien and Harry McNulty bagged two of UCD’s five tries as the students signalled their intent for the season ahead with a brilliant 39-20 bonus point win at Young Munster. The 20-year-old O’Brien’s score was an early contender for the IRFU’s new Try of the Month award, while McNulty touched down during a devastating run of three tries in nine second-half minutes.

Meanwhile, Naas are the early pacesetters in Division 1B after young backs Fionn Higgins and Michael Skelton scored two tries apiece in their 30-20 away victory over Dolphin. Player-coaches Johne Murphy and Barry Keeshan kicked 10 points each for their respective sides, the legendary Dolphin outhalf moving his league points-scoring record to 1,618 points.

Eddie O’Sullivan chalked up the first league win of his tenure as Old Belvedere head coach as they began the long road back from relegation with an encouraging 13-6 success against Brian McLaughlin’s Ballynahinch. Outhalf Pat Hughes crossed in the 68th minute for the game’s only try.

Newly-promoted Banbridge opened their win account at the first attempt in Division 1B, as winger Tom Caesar’s last-minute try saw them beat UL Bohemians 20-13 in Limerick. Former Ulster and Connacht scrumhalf Ian Porter captained Bann and led by example with a 15-point haul.