Rob Kearney and Heaslip out of Leinster’s South Africa trip 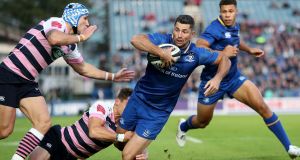 Rob Kearney has been ruled out of Leinster’s two-match trip to South Africa. Photograph: Billy Stickland/Inpho

Both Irish number eight Jamie Heaslip and fullback Rob Kearney have been ruled out of Leinster’s two week trip to South Africa for rounds three and four of the Pro 14.

Heaslip continues to rehab following a lower back injury from last season, while Kearney was withdrawn at half time against Cardiff Blues on Friday with a hamstring problem and will not play any part in Leinster’s two games on the road against the Kings and Cheetahs.

There was better news for Irish winger Dave Kearney, who has recovered from a knee injury that kept him out of the match against Dragons. Kearney, like backrow Jordi Murphy, was involved on match day against Cardiff in an extended squad. Both players will be considered to travel with the 28-man South African party.

Flanker Dan Leavy is unlikely to travel after rolling an ankle at the weekend, while a number of other players are awaiting assessment including international backs Fergus McFadden and Joey Carbery.

Mc Fadden picked up a pre-season calf injury against Bath, while Carbery also had issues with a tight calf in the same match.

Others that have overcome injury and are in the mix of selection are Peter Dooley, who has recovered from a bicep injury, Bryan Byrne, Peter Timmins, who played for UCD at the weekend, and Noel Reid.