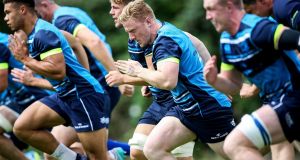 James Tracy gets up to speed during a Leinster training session at UCD. He broke into the Irish squad last year and was part of the Six Nations. Photograph: inpho

James Tracy is not buying any of the doleful theories of the Pro14 experiment being a failure just yet. The Leinster hooker is holding off on judgment day for the South African sides, who after two matches have looked like flair teams and sometimes cavalier but far from robust.

He’s not denying the mounting try prospect of facing count against and thus far a lack of impact but at home he believes, in Port Elizabeth and the southern edge of the Highveld “they will be different animals.”

It is a competitiveness that neutrals can only hope will arrive and a litmus test, of sorts, for the two new sides. With Leinster becoming the first club to travel south, for Leo Cullen and his team there is also an element of the unknown.

“I was all for it. A few of my friends were like ‘aw, that’s a bit of a trek’ but why wouldn’t you want to do it. I would be open to anything,” says Tracy. “It’s new challenges, new experiences. Everyone here is pumped. We didn’t think it would happen this year but fair play to everyone for getting it over the line.”

Infectious excitement more than nerves or trepidation, the hooker expects to see more than the two teams have revealed so far in Europe.

“I think that the league has shown, and rugby has shown, that any team at home are a different animal to away,” he says. “From their perspective, I’m sure as a player group it has been tough to come together and be playing on the other side of the world in the space of a couple of weeks. It all happened very fast for them. I know from watching video that they can play rugby.”

There has been an understanding of bedding in and adjustment but negativity is not too far away. Initial thoughts were that the two African teams would add depth to the group of serial contenders, Leinster, Munster, Scarlets and Ospreys and not cosey up to bottom-placed sides and align with the Italian clubs.

It is, believes Tracy, too early, too fast and too much a rush towards judgment. The Kings and Cheetahs have had many more changes to make than last season’s Pro 12 teams.

“There will be negativity about everything that happens in the world,” says the 26-year-old. “Someone will have something bad to say about it but from everyone I’ve spoken to in here we were all pumped for it. They are going to grow and grow.”

Because it’s the first, it is also a clash of cultures on their terms. It’s the Leinster brand going to the lion’s den, and Leinster are market leaders in Ireland. That too is a factor.

In Bloemfontein against the Cheetahs in the second game, Leinster are going to fly in late and deal with the altitude without acclimatising.

If it is hot and sunny, it might be more like the summer tour conditions of USA and Japan. Tracy broke into the Irish squad last year, was part of the Six Nations and also went on the June trip and good enough for Joe Schmidt to give him four caps.

“Yeah, definitely. In that respect, it’s Ireland v South Africa on a smaller scale. Of course we’re aware of that,” he says.

“It makes the occasion more special and especially to be the first ones. I think as a group we’ve pretty good fitness and cardio and from chatting with the international lads, who have been there before, unless you’re there (at altitude) 11 days before it’s basically just you have to get on with it.

“The lungs are going to be burning and you’ll be looking for the next breath, but we’re like that at the best of times so we’ll get on with it.”

When the squad return it is Edinburgh, Munster then Europe so it is not that far off and the injured Lions players will be filtering back. In that sequence you can see Cullen’s mind churning to have the strongest side for the opening pool stages.

“Any tour just galvanises a group. That’s a massive thing for us,” says Tracy. “Everybody is buzzing about it.”

But South Africa needs to live up to the billing.

All-Ireland League still on ice as clubs try to keep the fire burning 06:00
A man before his time – Hain’s heroic role in the history of anti-racist politics 06:00
Matt Williams: A Lions tour in a raging pandemic would be more than folly 06:00
Dublin’s James McCarthy goes back to basics with the same golden result 06:00
Argument for playing on still stands – even if optics are poor 06:00
Here is your handy guide to sport on television this week