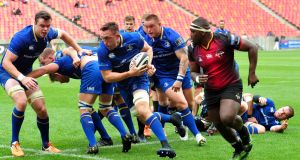 Leinster’s Jack Conan on the attack during his side’s 31-10 victory over the Southern Kings in the Nelson Mandela Bay Stadium. Photograph: Ryan Wilkisk/Inpho

The television pictures brook no argument, the smattering of spectators lost within the confines of the Nelson Mandela Bay Stadium.

The Southern Kings’s first ever home match in the newly minted Guinness Pro14 league had the atmosphere of a training session and for tranches of the first half, a similar intensity. On and off the pitch the South African franchise has some way to go to advocate that their long-term future lies in the tournament.

There are obvious teething problems, a hastily reconstituted squad of players and an exposure to a different style of rugby but performances like this won’t usher many through the turnstiles.

The fact that the game was live on television might have taken a little off the gate but what looked like hundreds rather than thousands were sprinkled around the cavernous venue.

Leinster captain Rhys Ruddock alluded to the atmosphere when he said: “Sometimes when there is a big, huge stadium and not a huge amount of people in it you just have to bring your own energy. I thought the energy they brought was probably greater than ours in the first half. That left us second best a lot of the time.

“We regrouped at half-time and I thought the intent and the energy that we brought at the start of the second half allowed us to take hold of the game and we grew from there. We are disappointed with the first half but credit to the way they played as well. They put us under a lot of pressure ball in hand and it was tough to defend.”

It’s a reasonable summation of the 80 minutes. Leinster had significant problems at the breakdowns in the opening 40 minutes, ball-carriers getting isolated and this was compounded by some poor clear-outs that allowed the Southern Kings to either poach possession or force penalties for not releasing.

It meant that the visitors lacked continuity and this prevented them from being able to build pressure. The slightly disjointed nature of their back play could be partially attributable to some new units within the team but some of the handling was nevertheless shoddy.

The Leinster coaching team will also be disappointed with some of the first-up tackling and against a better side than the Kings it might have been more costly; the visitors missed a whopping 18 in the first half.

Leinster coach Leo Cullen admitted: “We were a little bit inaccurate in the first half. I thought they came and put us under a bit of pressure. We just didn’t have enough control of the game. It was a little bit similar to last week, much more composed at the start of the second half, better with our execution and more direct with our carries. Our ball security was better.

“We got turned over four or five times at the ruck in the first half. There is a lot to work on but very pleased with the outcome.”

Having led 7-3 at the interval through a try from Noel Reid, converted by Ross Byrne, the visitors effectively closed out the match in the first 11 minutes of the second half with tries from Rory O’Loughlin, Jack Conan and Joey Carbery, ensuring the bonus point and the victory.

Dave Kearney’s try late on was the pick of the bunch, containing the most fluent handling that Leinster mustered in the match.

A number of Leinster players were playing their first match of the season and it showed particularly in the substandard rucking. When the visitors did secure possession, they frittered it away with some ropey passing and questionable decision-making.

Leinster relied heavily on individual performances, James Ryan, Rhys Ruddock, Luke McGrath, Jack Conan, Noel Reid and Andrew Porter conspicuous in generally high-quality output but from the team collective there is much work to be done.

The consolation will come in that a young, inexperienced side, didn’t succumb to the distractions of the build-up and managed to squirrel away the five points but the standards will have to rise appreciably if they are to get past the Cheetahs next weekend.

At that point the squad will be bolstered by captain Isa Nacewa and Jamison Gibson Park both of whom have returned to South Africa after sorting out visa issues in Dublin.

The concern for the home side is that their problems will take a considerably longer to unravel. It is worrying for the Kings and the tournament that a Leinster team shorn of so many front-line players can produce a fitful performance, largely based on their post-interval efforts and still romp to victory. That’s a tough sell going forward.

Pogba wins it for United; Dave Hannigan recalls first taste of emigrant life 07:04
Hurling between the high rise flats: My first glimpse of the emigrant life 06:51
Paul O’Donovan will ‘go with the flow’ as talk turns to Tokyo Olympics 06:35
Neil Lennon ‘won’t walk away’ after Celtic stumble again 06:30
Solskjær praises Pogba after strike sends Man United top 06:31
Here is your handy guide to sport on television this week