Munster’s dominant pack the foundation for win over Ospreys 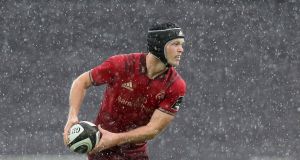 Munster demand perfection and even this deserved – if eventually narrow – victory over the Ospreys didn’t please everyone in Rassie Erasmus’ camp.

The final scoreline failed to give a true reflection of the game, and in truth there was only ever going to be one team to come out on top. Munster’s pack were dominant – using their scrum as a platform in the first half – and when the heavens opened after the break the visiting eight made sure they kept the ball in the tight.

It paid off, and it’s now three straight victories for Munster at the start of this inaugural Guinness PRO14 season. Nonetheless, the message from the camp at full time was clear. Munster believe they can improve further, and won’t stop looking for any extra edge.

Munster director of rugby Erasmus said: “We made a lot of errors, but we managed to grind out the win. We have a lot of work to do if we are going to beat Glasgow next week.

“It was a very scrappy game, but we played under par, particularly in the second half. I was very concerned and very nervous at that point, and we made a number of individual errors. There are plenty of things for us to sort, but I’m just pleased to get the win.”

That Munster secured victory was down to tries from Jean Kleyn and Darren Sweetnam, while out-half and captain Tyler Bleyendaal added a conversion and three penalties. Lock Kleyn produced a stand-out individual display to be named man of the match.

The Ospreys were poor, especially before the break, and their head coach Steve Tandy accused his players of a lack of effort. A sublime try from James Hook and 11 points from the boot of promising young Wales out-half Sam Davies accounted for the hosts’ efforts, but Tandy said: “There were people walking out there in the first half which just isn’t good enough.”

Echoing his boss Erasmus, Kleyn emphasised the fact Munster will have to go up another level when they visit Glasgow on Friday.

“We are pleased, but with any performance there are things to work on and that’s the case again. All the credit has to go to the pack.

“We’ve got good leadership and we kept a lid on the panic quite well. When we realised it wasn’t all going our way, we just regrouped and worked a little bit harder on what we needed to do. We didn’t focus too much on the Ospreys. In the PRO14 you’re always happy with an away win.”

Bleyendaal had missed with two simple early kicks. His third attempt opened the scoring, but Hook responded by dancing through some poor Munster tackling to make it to the line. Davies converted.

The try seemed to wake Munster up, and they scored two of their own before the break. First Kleyn powered over and then a clean line break from Chris Farrell laid the platform from which Sweetnam was given an easy finish. Bleyendaal converted the first of those two efforts.

A 15-7 half-time lead was one Munster deserved, but three kicks from Davies to one from Bleyendaal made it just two points between the teams in the second half.

Heavy rain lashed the Liberty Stadium and made for a scrappy encounter, but Munster’s dogged forwards meant they never really looked like losing. The away scrum had been impressive and with conditions dictating the need for a power game, Kleyn and his men stood up to be counted.

They drove line-outs, won the physical battle, and eventually got their rewards.

Ospreys replacement Nicky Smith was penalised in front of his own posts with three minutes left on the clock and Bleyendaal stepped up to seal victory.

The challenge for Munster now is to make it four from four at Scotstoun against a side they played four times last season.

“We made some mistakes we didn’t want to, and on Monday we’ll go back to the drawing board to correct those for the Glasgow game. It’s going to be a big one,” Kleyn said.

“Glasgow will be a tough opponent. We played them more than enough last season so we know what they’re about. It’s going to be a big clash. They are always a competitive side, and we’re going to have to put in the hard yards this week to make sure we come out on top.”

New FAI president set to be elected on Saturday 19:22
NFL Division Two: Malachy Clerkin’s team-by-team guide 18:00
Darcy Graham ruled out of Scotland’s clash with Ireland 17:44
Magic Wand bids to go one better in $1m Pegasus World Cup in Florida 17:41
Ben Stokes involved in verbal altercation with fan in Johannesburg 17:38
Here is your handy guide to sport on television this week