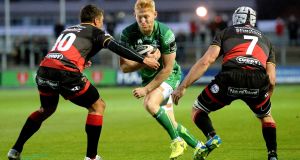 Connacht’s Rory Scholes is tackled by Gavin Henson of the Dragons during the Guinness Pro 14 game at Rodney Parade. Photograph: Ian Cook/Inpho

Former Connacht hooker Bernard Jackman got one over this former club when steering Dragons to their first victory in the Pro 14 last night.

Jackman had targeted this fixture as a must-win after two successive losses, and they did not let the 5,065 faithful down at a revamped Rodney Parade.

With all the damage produced in the first half with a 21-3 lead, Dragons’ continued aggression at the breakdown, superiority in the scrum, and the controlling influence of their half backs, ensured they had Connacht on the back foot for much of this fixture.

It had all the hallmarks of last year’s defeat for Connacht at the venue, suffering the worse possible start. Within two minutes, the home side scored, left wing Hallam Amos finishing off an after spotting huge space out wide. Despite Connacht’s scrambling defence, the damage had been done, with centre Jack Dixon and hooker Elliot Dee making valuable inroads before flanker Harrison Keddie fed Amos who ran untouched to the line.

Connacht outhalf Jack Carty replied with a straight-forward penalty to settle some uncharacteristic early nerves, but it was not long before the home side had re-established their superiority, the pack forcing the penalty at the breakdown and Henson kicking for touch.

Captain Cory Hill controlled the line-out, and after the pack drove forward, Dee once again made the break and crashed over, with Henson adding the conversion for a 12-3 lead.

It did not get any better for Kieran Keane’s side as the penalties continued to mount against them, and Henson tapped over a easy penalty to extend the lead to 15-3 after 23 minutes, leaving Connacht shellshocked.

There was no halting the home side’s momentum and after Connacht lock James Cannon was yellow carded, Henson was content to keep the score ticking over with a penalty kick.

While the Dragons were relentless in that opening half, Connacht were poor. Despite last week’s superiority at scrum time, on this occasion the Dragons held sway. Henson was with another penalty, before her nailed a superb kick from the 10m line to extend the lead to 21-3.

Connacht upped their intensity appreciably in the second half with Kieran Marmion, Jarrad Butler and Dave Heffernan introduced, and they were rewarded after 53 minutes when Heffernan crashed over, propelled by his driving back following a penalty to touch. Although Carty missed the conversion, Keane’s squad continued to control possession and territory, but they failed to capitalise in the face of the Dragons’ aggression and outstanding defence.