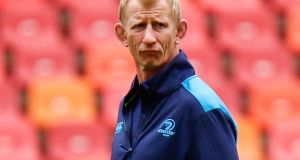 Leo Cullen: “Neither of those players [Jamison Gibson-Park and Isa Nacewa] were in the starting XV so in terms of disruptions to the group it is pretty minimal.” Photograph: Mike Sheehan/Inpho

Even with their Lions chilling in Dublin and their captain not available for Leinster’s historic first Pro14 match in South Africa, there is a sense that Leinster will have to suffer some sort of systematic failure not to get this one over the line.

Leo Cullen has picked a team that is talented, in areas lacking some wise old heads but with an exciting backrow line-up. Jamison Gibson-Park and Isa Nacewa returned to Dublin on Thursday and successfully applied for a visa from the South African Embassy. They will rejoin the squad on Sunday in Cape Town and so a clerical blunder has forced them to miss the first match.

Connacht put 32 points on the Kings last week and although this is a different environment, the South African side have come clean that they are rebuilding their side after a clear-out of players following the last Super Rugby season.

Despite Leinster’s light feel, Jordi Murphy and Dave Kearney, both back from injury, Jack Conan, Rhys Ruddock, Sean Cronin and Joey Carbery, also returning from injury, bring international freight to the side.

Outhalf Ross Byrne again teams up at halfback with Luke McGrath for the second week in a row.

In the front row Cullen knows that props Ed Byrne with nine Leinster caps and Andrew Porter with 10 caps may lack some experience, while lock James Ryan starts for Leinster for the first time.

But with James Tracy, Michael Bent and Cian Healy on the bench Cullen has plenty of front row depth to bring into the match. The visa incident, said the coach, was not disruptive.

“We named to the group the starting XV on the Tuesday before we left. Neither of those players were in the starting XV so in terms of disruptions to the group it is pretty minimal,” said Cullen. “The two players had travelled to South Africa with Super Rugby teams in the past and not needed visas. They were asked if they needed visas, which they hadn’t. . . so that was an oversight on our part.”

1 Monica Seles: The warrior queen who could have been the best ever
2 Ferrari’s Charles Leclerc ‘will not take the knee’ before Austria GP
3 Michael Walker: Ian Baraclough staying on trend, from Sligo to Windsor Park
4 Serpentine stays on from the front to steal Epsom Derby for Aidan O’Brien
5 Matt Williams: Six Nations must recognise the desire for revolution outside Europe
Real news has value SUBSCRIBE