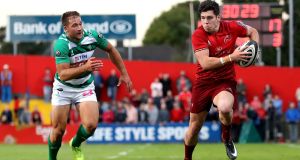 Rassie Erasmus has made just one change to his Munster team from last week. But it is an important one. In comes outhalf and captain Tyler Bleyendaal to lead Munster against an Ospreys team that has begun the season more lukewarm than hot.

A stuttering win over Treviso (22-13) at home in their opening match came before losing to Glasgow last week, where the Welsh side allowed the Scots a bonus point.

The wide attacking game Ospreys prefer to play has not quite fired for them with Glasgow outscoring them four tries to one.

Ospreys are looking to James Hook and his 81 caps to snap them into shape as he made a mark coming off the bench last week. Decision making and creativity from inside centre is what coach Steve Tandy is looking for from the veteran.

Tandy also has Dan Biggar among the replacements, evidently refreshed after his time with the Lions. Dan Lydiate, who has not played since November 2016, is also on a bench that includes six internationals. Ospreys are slowly returning to strength.

But Munster have hit the ground running with two bonus points wins against Cheetahs and Treviso, perhaps nothing to write home about. With Erasmus making minimal changes he’s looking for cohesion and consistency from his team in Munster’s toughest challenge so far.

Simon Zebo is, for the second week, dangerously positioned on the bench with four-try Alex Wootton again in a backline with Chris Farrell, Andrew Conway, Darren Sweetnam and Jaco Taute that knows how to score.

“We set ourselves up well, but we let ourselves down with that lack of accuracy at key moments that meant we lacked the clinical edge that would have given the scoreboard a different look,” said Tandy about his side’s loss to Glasgow.

“We are really looking forward to Saturday afternoon and testing ourselves against a team that have started really well with back to back home wins in the first two rounds.

“We know what to expect from Munster, in that they’ll be physical, well organised and clinical, and we have to match that.”

1 LeBron James among those to slam Drew Brees’ anthem comments
2 How a GAA club sprang up in east Belfast over Sunday breakfast
3 GAA players spend just 2.5 seconds within 2m of each other during play
4 Connacht continue player hunt as six academy graduates promoted
5 Conor Stakelum answers the call after skating ambitions put on ice for now
Real news has value SUBSCRIBE