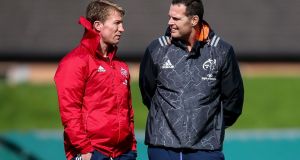 Munster’s director of rugby Rassie Erasmus believes the two South African teams who have joined the Pro14 must be given at least six weeks before a true assessment of what they will bring to the competition can be made.

The Cheetahs, beaten 42-19 by Ulster and 51-18 by Munster, and the Southern Kings, who lost 57-10 in Llanelli and 32-10 in Galway, have suffered badly on their trips to Europe for the opening two weekends.

Those results have prompted fears that the South Africans, like the two Italian teams brought in seven years ago, might not increase the competitiveness of the competition.

But Erasmus, who will return to South Africa in mid-season to become the national director of rugby, said it is far too soon to judge their impact and he is confident that they will deliver.

He oversaw Munster’s demolition of the Cheetahs on Saturday but before the end of the season the displays of the Kings and Cheetahs will come under his new role back in his native country.

“The Kings, they have got an awesome really good coach Deon Davids, and also good assistant coaches. They were on the back foot just purely because the decision was made so late for their inclusion. They’ve lost a lot of their players. He is a guy that can build a squad really quickly. They might take a bit of time for them to settle in.

“It will be tough going to Port Elizabeth for teams but their squad is a bit thin in year one. Their squad there has only four or five guys from Super Rugby. There will be lots of talent but getting them all to channel in the beliefs from other clubs and so on will take a little bit of time,” said Erasmus.

He said the Cheetahs will be expected to make a more immediate impact as they have most of their Super Rugby squad.

“The Cheetahs are also Currie Cup champs last year. The Cheetahs only have their three Springbok players out at the moment. People say they are managing two competitions, that is not really true. They focus solely on the PRO14 with their strongest team. The other players that are left in the province do play Currie Cup.

“With teams going over to Bloemfontein I have got no doubt they are going to become really, really good and this year already. Teams will see them getting tougher. I don’t fear that, I just see positives. The Kings might take a little bit longer.

“Definitely no need for panic. When six weeks are gone people can make a fair call on that and see, are they really competitive this year or not.”

His men have made a perfect start with ten points in the bag after convincing wins over Benetton Rugby and the Cheetahs but they will face a stiffer test next weekend for their first away match as they travel to Swansea to take on Ospreys.

But with new signing Gerbrandt Grobler now confirmed to be out until January with an ankle injury picked up in a preseason game away to Worcester, Erasmus might be in the market for a secondrow, not least as the South African lock was signed from Racing 92 to cover for Dave O’Callaghan and Darren O’Shea, both of whom are also out until the new year.

“We have great potential in the Academy with Fineen Wycherley, Sean O’Connor and even Seanie McCarthy who is training with us currently. Last year a guy like Dan Goggin put up his hand and played 18 games. If that happens, wonderful, but I am certainly starting to think, it is more an experience thing, it is not a talent thing, a potential thing.

“It is an experienced player which you had in, Donnacha [Ryan] and Gerbrandt Grobler now who is injured. I might have to start looking at that,” added Erasmus, who is also assessing a knee injury to prop Dave Kilcoyne as he prepares for the trip to Wales.