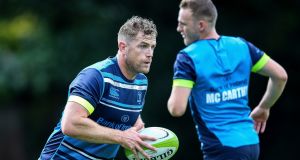 Jamie Heaslip during training last month: the Leinster number 8 has been ruled out for the games against the Kings and Cheetahs. Photograph: Gary Carr/Inpho

Leinster are hoping that Jamie Heaslip will be fit to play when the team returns from two Pro14 games in South Africa against the Kings and Cheetahs. The squad leaves on Tuesday but Heaslip has not been included.

Although the Ireland number eight made a graduated return to training two weeks ago, medical staff and strength and conditioning coaches were not convinced enough progress had been made for him to be considered for South Africa.

Those injured players who have been left at home include Rob Kearney, who tweaked a hamstring against Cardiff, Johnny Sexton, Robbie Henshaw, Tadhg Furlong, Sean O’Brien and Garry Ringrose, all of whom will continue to rehab over the next fortnight without the touring squad members.

On Monday forwards coach John Fogarty emphasised the importance of every player on the squad having to make a contribution over the next two weeks.

The second match against Cheetahs will be played at altitude with Leinster flying in late and without any “thin air” preparation beforehand.

“When you have to bring 28 players they all have to add value when they are out there,” said Fogarty. “When you get down to the last four or five who have little things they have to get through today in training sessions, that’s when it becomes a little bit tricky.

“You need to make sure from a S&C [strength and conditioning] point of view, from a medical point of view he’s 100 per cent and good to go, that he can last two weeks and two games.”

The good news for Leinster is Dave Kearney has recovered enough from a groin issue and Jordi Murphy’s knee has mended enough for both players to be considered for selection.

Both Fergus McFadden and Joey Carbery will be assessed before the squad takes off. Carbery flagged some tightness in his calf after Leinster’s pre-season game against Bath and is one of the half dozen or so players Fogarty was talking about having to be in a position to make a contribution.

Ross Byrne played outhalf at the weekend against Cardiff but with Sexton still out of contention with a wrist injury, Leinster will want to have another pivot and also get Carbery game time. The New Zealand-born player can cover other backline positions.

McFadden is another player who can operate in more than one position and like Carbery was being assessed on Monday to see if he has made enough progress on a calf injury to make the trip.