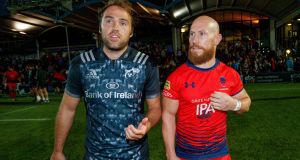 Munster sealed victory with a strong finish to a preseason clash against Worcester at Sixways. Late tries from replacement prop Brian Scott and debutant James Hart secured the win for Rassie Erasmus’ men.

The opening half produced six tries, with Worcester leading 26-14 at the break. A good start by Munster saw Rhys Marshall put Tommy O’Donnell through after just four minutes. Yet Donncha O’Callaghan, captaining Warriors for the first time and backed by another Munster stalwart Peter Stringer, inspired a Worcester revival which produced four tries before the break.

Stringer set up his half-back partner Sam Olver for the opening try, before Dean Hammond and Wynand Olivier also got in.

Munster had Jean Kleyn binned for a high tackle on Stringer before new signing Gerbrandt Grobler put Duncan Williams through for a try four minutes from the break. However, the ball bounced kindly for Worcester’s Perry Humphreys to increase their lead before the break.

The second-half was more disjointed as both sides used their extended benches. The most significant change for Munster was the introduction of hooker Mike Sherry for his first action after recovering from a back injury which has sidelined him since May 2016.

A second try of the match from Williams after 56 minutes cut the gap to 26-21.

Scott then scored with four minutes left, before Hart sealed the win in the final play.