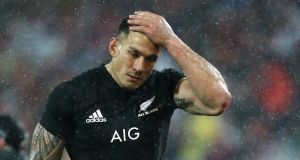 Sonny Bill Williams returns to the New Zealand side for the Rugby Championship opener against Australia in Sydney. Photograph: David Rogers/Getty Images

Centre Sonny Bill Williams was recalled to the All Blacks team on Wednesday for their opening Rugby Championship match against Australia after serving a four-match suspension.

His inclusion was one of six changes made by coach Steve Hansen to the line-up that drew 15-15 in the final Test of the series against the British and Irish Lions.

There was no place in the team, however, for flanker Jerome Kaino, who was yellow carded in his last two matches.

Damian McKenzie was drafted in at fullback, with Ben Smith switching to the wing. Ryan Crotty and Rieko Ioane return from injury and illness respectively for Saturday’s showdown in Sydney.

“This Test will give us a great opportunity to gauge where we are at when it comes to things we have been working on since the Lions tour,” Hansen said.

Williams has been out of competitive action for seven weeks after being dismissed for a dangerous shoulder charge on Lions winger Anthony Watson in the second Test in Wellington.