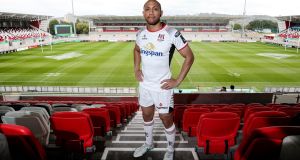 Christian Lealiifano at the Kingspan Stadium: “I’m humbled that a team still values what I can produce and what I can do.” Photograph: Matt Mackey/Presseye/Inpho

Les Kiss, understated and always a step ahead, is struggling to find rugby’s beloved positives given the fragile state of Ulster’s outhalf options.

The launch of the new league has always been a platform for optimistic crystal-ball gazing and new thinking. But Kiss just can’t draw the conversation away from the pivotal outhalf position.

It is Wednesday morning in Dublin and in Belfast solicitors for the Ireland and Ulster players Paddy Jackson and Stuart Olding are entering not guilty pleas to rape charges on their behalf at Laganside Magistrates Court.

The IRFU and Ulster Rugby have stated that the two will not play rugby until the issue is resolved.

Christian Lealiifano, capped 19 times for Australia, also arrived in Belfast on Wednesday morning and Ulster are banking on him to stay fit until January, when his contract expires.

“It’s been a pretty quick transition,” said Lealiifano at Thursday’s press conference. “I saw the team do their captain’s run this morning and I’ve sat down with the coaches to go through some things as well to try and fast-track that a little bit.

“I have a little bit of time while they’re away to sit down and watch some stuff, and watch them play as well over the next day or so. Then hopefully hit the ground running on Monday.”

Lealiifano, who was diagnosed with Leukaemia in 2016, will play outhalf and Kiss will pray he stays injury-free. With Jackson unavailable, there is precious little cover beneath the stop-gap Australian.

“The only way we have approached that is to deal with the reality that is in front of us,” says Kiss. “That’s our focus. I know what you are asking there. We have to use these five months wisely and see where it places us on a monthly basis.

“We will be light regardless. If you have one injury now you’re still shy of where a good rugby program should be.”

Lealiifano’s role will be as a playmaker and controlling the backline but those backing him up also need guidance. He has been briefed on the situation and the 29-year-old knows he will be expected to be a tutor to less experienced players.

There is no note of desperation in the voice of Kiss but as he outlines the thin Ulster cover at outhalf, the breadth of the challenge seems immense.

“Look we have Brett Herron. He’s 21. Johnny Mc Philips could have played under 20s this year,” says Kiss. “Pete Nelson, he’s probably 12, 15 games back after serious injury. He’s played mainly 15 but we’re using him at 10 so we know that Christian with 19 Tests, he’s a leader and a captain at Brumbies. He’ll bring a lot of qualities that will help the whole group.”

The temptation is to play Lealiifano in every game. But Kiss knows what outcome that would have. He has spoken to the Brumbies’ performance manager and has looked at rugby program information and GPS data.

There is a feeling that running him into the ground, even if it is only until January, would be counterproductive to Ulster ambitions. At that point the headache will begin again.

Kiss also adds that Ireland’s reputation abroad is that they look after their foreign players.

“We do give credence to the fact you can’t play eight, nine, ten (games) in a row all the time,” says Kiss. “Some players can handle it, some can handle only three before you have to cool their jets and give them a chance to recover. I have good information on Christian. There is no way we are going to play him every week. We will certainly use him wisely.

“Every month is going to be critical in terms of how those young guys grow. You’ve still only got three fly-halves at the end of it. It’s critical that position but hopefully the team is good enough to be able absorb what it is.”

Lealiifano’s enthusiasm for the project is apparent, especially after 12 months that were emotionally draining for him. He is also hoping his debut for Ulster will go better than the first match he played with the Wallabies.

That debut lasted less than one minute as he was knocked out attempting to tackle British and Irish Lions centre Jonathan Davies in Brisbane during the 2013 Lions Tour.

“Over the years I’ve developed a lot of experience and am able to lead the side around from the fly-half position from a playmaker point of view,” he says. “I like to play attacking rugby, like to run the footy a little bit, and then try to be sort of solid in defence.

“I’m humbled that a team still values what I can produce and what I can do, that’s exciting,” he adds. “To think that you probably couldn’t play rugby again is definitely hard, and then to be able to come through the other side is truly rewarding.”

Lealiifano’s hard yards are behind him. Ulster’s are now ahead.