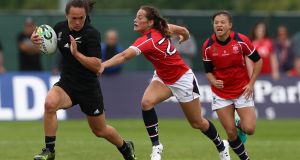 Portia Woodman of New Zealand breaks clear from Lindsay Varty of Hong Kong to score a try during their pool match in UCD on August 13th. Photograph: David Rogers/Getty Images

Here comes the serious and perhaps, finally, the competitive rugby at this World Cup.

England, New Zealand and France all breezed through the round-robin stages, each performing to similar high standards while the USA lucked out with how the three pools were drawn.

The Americans will struggle to live with New Zealand (kick-off 5pm, Kingspan Stadium). Earlier this year they lost twice to Canada while the Kiwis dispatched the nation ranked fourth in the world 48-5.

These Black Ferns look unstoppable. There is a familiar viciousness to how their forwards enter rucks, which has not been seen by other nations on show in UCD last week.

Fiao’o Faamausili is an outstanding, and typically understated, leader at hooker while in tighthead Aldora Itunu they have the most physically imposing women on show. Itunu helped herself to three tries against Canada.

The backline is fantastically gifted with Selica Winiata, Renee Wickliffe and Portia Woodman gliding above the grass.

England versus France (kick-off 7.45pm) should be the game of this tightly condensed tournament.

The Red Roses have the artillery to retain the trophy next Saturday due to the control exerted by outhalf Katy McLean, Emily Scarratt starting to kick her goals and perhaps the greatest backrow – Alex Matthews, Marlie Packer and captain Sarah Hunter– that women’s rugby has ever seen.

France have lost flanker Romane Menager – arguably the best player we have seen so far – so that nudges Le Crunch towards England but in fullback Montserrat Amedee and number eight Safi N’Diaye they have players capable of winning Test matches on their own (as Ireland discovered).

But, as Ireland also discovered yet failed to capitalise, France always fade. England’s bench, which includes Rochelle Clark and her 127 caps, should guarantee the champions finish better than they start.

Meanwhile, Fiona Coghlan will lead Ireland against England in a legends charity match on Friday in Malone RFC at 7.30pm.

“I am very proud to be involved in this game and thrilled that many of the players who were part of Ireland’s first ever test game in 1993 [against Scotland] are involved – some as players and some as spectators,” said Rosie Foley, former Ireland international and sister of the late Anthony Foley.

This match will raise funds for DEBRA Ireland.