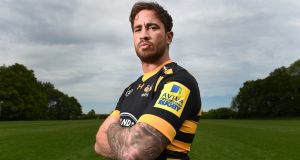 Danny Cipriani converted his own try to seal Wasps’s win over Ulster at the Kingpan Stadium. Photograph: Getty

Ulster’s opening pre-season friendly ended in defeat to Wasps as the visitors ran in four tries at the Kingspan Stadium.

With both sides missing most of their front-liners – the Irish province were without their Ireland and Lions contingent – it proved to be typically scrappy fare with multiple substitutions hardly helping continuity.

Danny Cipriani ended the evening scoring 11 points, from a well-taken try and three conversions, while Ulster – who scored three tries – were left to rue a decidedly patchy showing, riddled with handling errors, ahead of their final hit-out next Friday at Northampton Saints.

Visiting scrumhalf Craig Hampson got an early try for the visitors, converted by Cipriani but Ulster came back through a Brett Herron penalty in the 21st minute followed by a try from secondrow Peter Browne.

Herron missed the conversion and the half ended with the visitors scoring their second try after prop Simon McIntyre was driven over with Cipriani’s conversion making it 14-8 to the Aviva Premiership side at the break.

The new half started with Ulster number eight Nick Timoney putting centre Callum Patterson clear and Peter Nelson converting to give Les Kiss’s side the lead again at 15-14.

It lasted seven minutes when Wasps swept upfield for winger Josh Barrett to dot down with Cipriani missing the extras.

Cipriani then converted his own try which followed on 58 minutes and no further scores came from there on in as the game petered out.