Hard to see Ireland stopping France in their tracks

If preceding games are to be any guide, French look well-equipped to make last four 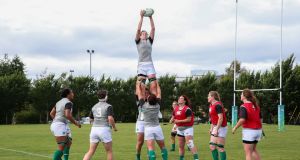 France are the wrong team to face head on yet, of late, these brave Irish women know no other way. The road to a Belfast semi-final still beckons but it comes with the promise of a deep, physical toll.

On paper, using logic and ignoring the belief that wonderful stubbornness will be enough, the bookmakers have this game well covered. Paddy Power, having seen 20 French tries in two matches, starting from kick-off against Japan, made them 15.5 point favourites on the handicap betting.

A landslide victory then?

Also, France look capable of winning this World Cup. Certainly, they are of the same standard and cohesiveness as displayed by England and New Zealand.

In Montserrat Amédée they have a fullback who can glance up under pressure before dropping a perfectly weighted cross field kick for winger Shannon Izar to score. That is just one example of 20.

“If you were a neutral you would say it is a David and Goliath clash,” said Ireland coach Tom Tierney before rigidly sticking to his “cup final” mantra, echoing Declan Kidney in 2011.

Cup final rugby will not be enough to beat France. History supports that view.

David only had to fight Goliath once. History also reminds us that Ireland should make a scrap of it. Do not expect pretty viewing. In seven meetings between the sides going back to Pau in 2012, they have stayed within a score in four of their five defeats. Ten veterans remain from those days in this current 23-woman squad.

But the sling shot won’t work this time. Nor will the driving maul, certainly not as easily as it sliced open Japan. France know all about Ireland’s primary route to the try line.

This fixture has only produced two Irish victories; the 2013 penultimate Grand Slam match – when Joy Neville and Niamh Briggs combined for a superb try – and last February in Donnybrook.

That was a game so far beneath the standard of both sides that it barely warrants a mention except to note France left disgusted with the breakdown refereeing of Sarah Cox and Ireland matched their bigger opponents up front.

Finally, that same eight forwards take the field together again. There was good reason for the delay. Sophie Spence, Ailis Egan, Ciara Griffin and Maz Reilly were kept on ice with varying degrees of success during sloppy victories over Australia and Japan for this very night.

Reilly must never be left out of an Ireland team again. Egan too. The set piece is built upon them, and by removing Reilly’s height or Egan’s scrummaging the entire offensive plan crumbles.

For clear evidence watch the abysmal opening 28 minutes against Japan.

Nicole Cronin is a form selection at scrumhalf ahead of Larissa Muldoon. Cronin has the slicker pass which indicates Nora Stapleton might finally start sending Jenny Murphy, Ali Miller and Sene Naoupu over the gainline. They could also do with igniting Hannah Tyrrell’s attacking ability from fullback.

So much has gone wrong of late that it feels like a monumental ask for Ireland to suddenly flick the switch.

Stranger things have happened. The bones of this side toppled the Black Ferns in 2014, they reached a World Cup semi-final, they have beaten France.

“If you let them bring their offload game, give them field position, let them get their maul going especially in the 22, or big ball carriers to come around the corner you are going to be on the back foot for most of the game,” said Tierney, who oversaw a miserable enough 18-6 defeat down in Perpignan in 2016.

The defensive line speed must undergo dramatic improvement, and Jenny Murphy’s return helps, but if Ireland play like they have been and France do as well this meal will be cooked long before any half-time team talk can spur Claire Molloy’s pack into what would be an almost impossible revival.

“If you look at the history of Ireland v France games – the women and the men’s game – you have the situation where France traditionally always come out to blow you off the park in the first 10, 15 minutes,” said Tierney.

“Then they play champagne rugby. The key is to counteract that. We need to impose our game on them. That’s the challenge every Irish team has faced no matter what French team they have played.”