Review in the offing as crestfallen Ireland lick their wounds

‘We haven’t performed at this World Cup, absolutely’ – Paula Fitzpatrick 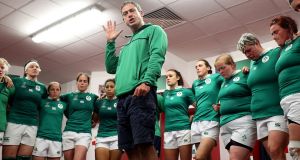 A review is coming but probably not of the root and branch variety.

Anthony Eddy, the Sevens and women’s director of rugby, seems intrinsically linked with fellow Australian and IRFU high performance director David Nucifora, who is only halfway through a five-year master plan to modernise the professional game on this island.

Everyone answers to Nucifora. Even Joe Schmidt.

Where the women’s 15-a-side amateur squad features in the 55-year-old’s long-term strategy remains unclear (he has yet to do last season’s media briefing with rugby correspondents).

Despite €500,000 being put aside for women’s rugby at the IRFU’s recent AGM, the Sevens programme remains the priority and is, seemingly, improving on the largely unseen global circuit. Tierney called himself “an assistant coach” of that group a few months ago when explaining how he works in the high performance unit that also incorporated the 15s squad to much internal fanfare this season.

Yet, as it stands, a review of Eddy’s position is not expected. That means Tierney will carry the can but, speaking to those in and around this team, Eddy and not Tierney made the major decisions that impacted on this failed, and failing, World Cup campaign.

Defeat to Wales on Saturday would see Ireland finish eighth of 12 nations which means they would not automatically qualify for the 2021 tournament.

Incidentally, that competition is heading to Hong Kong or Wales with England another possibility.

Eddy coached for most of his career in Australia, and oversaw the Wallabies Sevens programme along with stints as assistant coach with the ACT Brumbies and Queensland Reds. That’s besides a season-and-a-half in charge at Worcester Warriors who released him in November 2006 when owner Cecil Duckworth stated: “We’ve certainly lacked penetration.”

Ireland have lacked penetration all throughout this 17-day World Cup.

“We are creating a player base,” Tierney protested after this 36-24 defeat to Australia, a nation that has all but ignored 15-a-side women’s rugby until this summer.

“Is the player base as good as it needs to be? From a performance level obviously we have some way to go. . . I am on a break for a couple of weeks,” said Tierney, referring to Sunday onwards. “I am contracted to the IRFU for another bit yet so we will just see where that takes us.”

Some blood from a stone was needed, yet again.

Tom, what’s left on your contract?

You were appointed in December 2014.

How long is it?

“I have a three-year contract.”

So do you expect to lead Ireland into the Six Nations?

“I have a review after this.”

Do you intend to lead Ireland into the Six Nations?

“I have a review and we will see where we will go.”

A serious concern in how many players will possibly follow Ruth O’Reilly into retirement this weekend. Eleven of this 28-woman squad are aged 30-plus.

The inspirational Marlie-Louise Reilly is 37, Lindsay Peat is 36 and even the future of injured captain Niamh Briggs, age 32, will be interesting.

“That is a question I can’t answer,” said Tierney. “There are a lot of girls in the prime of their rugby lives so it is a question they have to answer.”

That could be the biggest regret when the collective performance of Ireland this past fortnight is examined; they were in the prime of their rugby lives.

“Whoever we face next [Wales, after they lost heavily to Canada] we will throw absolutely everything we have into it,” said occasional team captain Paula Fitzpatrick. “That’s the way we are built, the way we are designed. It is the way we have trained to play.

“We always talk about leaving the jersey in a better place. That is part of that: leaving it for the next generation coming through, so they have a chance of coming to a World Cup and putting Ireland in the upper echelon of teams.

“We need to be there. We are a quality Six Nations side. We haven’t performed at this World Cup, absolutely. But we need to be at the World Cup.”

Their motivation runs even deeper than that.

“It’s about us being Irish,” Fitzpatrick added, “but mostly it’s about us sticking together as a group.”