Leinster shorn of their top talent for trip to South Africa 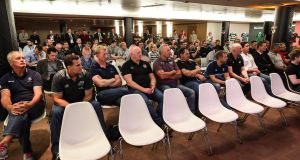 Munster’s Rassie Erasmus (second left) and Leinster’s Leo Cullen (third left) with their fellow coaches at the launch of the 2016/17 Guinness PRO14 season at the Aviva Stadium in Dublin. Photograph: Billy Stickland/Inpho

New Pro14 rules governing teams travelling to South Africa and Joe Schmidt’s player welfare system means Leo Cullen will not have his strongest Leinster side for the trip in rounds three and four of the newly configured competition.

Leinster players who played on the Lions tour were due to be reintroduced by the province in round five of the Pro14 – and at the earliest round four.

However because Leinster are not allowed to fly out players to South Africa for the second match, the likelihood is that Johnny Sexton, Sean O’Brien, Jack Mc Grath, Robbie Henshaw and Tadhg Furlong won’t play with the injured Garry Ringrose also a doubt.

“We want to be able to manage the players and take a longer-term view with guys who have been away on the Lions,” said Cullen.

“For us, we had five guys on tour. Robbie got injured. Johnny and Tadhg picked up injuries. Seanie had picked up an injury. Now, he is back training. Jack came through pretty well.

“When those guys came back, realistically, we talked about them being reintroduced around round five. Some of them could potentially have been brought back for round four.

“But, the fact we are in South Africa means we are not going to fly those guys out for that. It just presents all these challenges.”

Leinster face the Kings in round three on September 14th before meeting the Cheetahs the following week on September 22nd. The tournament prefers that less players travel because of cost issues. Leinster are planning to take 28 players for the two games, which means the regular weekly practice of 15 players against 15 between matches cannot happen.

“A lot of planning and thought goes into who comes back [to Leinster] when, who they come back with,” said Cullen. “That’s complicated at the best of times, but throw in a trip to South Africa in round three and four...it’s not like we’re allowed to fly guys out, fly guys home.

“That’s not the way it’ll work. We’re being told that we’ll have our tour party, and then we’ve to do our best with that. The rules are being made up as we go along so it’s going to take a bit of time,” he added.

Leinster leave Ireland for South Africa on the Tuesday and arrive on Wednesday before the Saturday match. The second game takes place on the Friday of the second week.