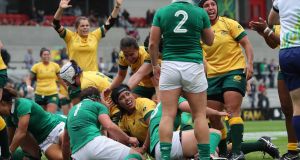 Failings in Irish preparation for this home World Cup need to be explained to avoid a recurrence.

Jaded and leaking yards of Belfast grass to fledgling Wallaroos, Ireland looked beaten by half-time. Of course this ended before that.

It probably collapsed way before the French carved them open last Thursday.

The physical toll of four test matches in 13 days came calling. Claire Molloy, who failed a Head Injury Assessment (HIA), and Jenny Murphy, having repeatedly put herself in harm’s way for the cause, were both forced off within 13 minutes.

“There was no suspected (concussion) about it,” confirmed Ireland coach Tom Tierney whose three year contract ends in December. “They were both gone and both removed straight away for their own health by the on site medical staff.”

Captain, openside and defensive enforcers, this team could never afford to lose either player.

The trajectory of Irish performances has been on a downward spiral since beating Australia 19-17 on August 9th with nowhere near the 8,000 tickets sold showing up at old Ravenhill for this 2pm kick-off (the French and English came later).

Again, here was a performance bursting with bravery but little else.

Ali Miller played her part. The Laois winger tore onto Murphy’s grubber before swerving away from two defenders, to double down on Ailis Egan’s 14th minute try off Maz Reilly’s ever dependable maul, but these brief chinks of light were snuffed out by Australian dominance. Their three first half tries proved the gold medallists from Rio have completed the smoothest transition into the 15 aside code.

“We’re not the first Irish team not to achieve what we wanted in a World Cup so there’s nothing new there,” was Tierney’s pre-match assessment that he repeated afterwards.

Such defeatism seemed to seep into his players psyche. There has been little progress in three seasons from a squad of high achievers who are about to be disbanded - 11 of the 28 are 30-plus while many of the others will prioritise Sevens leading up to Tokyo 2020.

The loss of Molloy after eight minutes was immediately felt at the breakdown. The Wallaroos knifed through the Irish underbelly but they had already leaped in front when Sharni Williams stood up Sene Naoupu before beating her opposite number on the outside.

These gliding centres, Williams and the superb Sarah Riordan, hurt Ireland the most.

Nora Stapleton converted Miller’s fine try for a 12-5 lead but that’s when Australia’s power game took over. After lock Alisha Hewett was held up in the in goal by Hannah Tyrrell, a simple switch move off the resulting scrum saw Riordan burst past Stapleton’s half tackle.

Ireland were blessed, by Aussie errors, to only trail 19-12 at the break but Hilisha Samoa did force her imposing frame over the try line.

The contest was only going one way. Any hope of finishing fifth, Ireland’s world ranking before the tournament, disappeared when Hewett eventually rumbled over for her try.

It was known from the Pool stages that Australia had superior athletes but here they also seemed better conditioned, better coached.

The misery kept flowing down upon Ireland. Williams slipped through a brittle midfield before sling-shotting Mahalia Murphy under the posts.

Ashleigh Hewson continued her fine kicking display with the conversion.

Tierney responded by emptying the bench. Sophie Spence, inexplicably used as an impact for half this tournament, and Paula Fitzpatrick both dived in for late tries as Ireland, as ever, battled to the bitter end.

Oh wait, they have a seventh place play-off against Wales on Saturday.

Defeat would force them to qualify for the 2021 World Cup (a feat Scotland and South Africa failed to achieve for this 12 nation tournament) so that battle still matters.

“It is what it is,” Tierney said more than once. “Unfortunately we are where we are now.”

Afterwards, as before, Maz Reilly could be seen in the Irish circle speaking passionately. The lock, like others on the field, have experienced the greatest days imaginable in the green jersey.

Now they are forced to dig deeper than seems possible. At least Wales look beatable. Despite impressive performances against New Zealand and Canada during the Pools stages, the Canadians crushed them 52-0 last night.

Ireland, likely to be without Molloy, Murphy and possibly a few more battered bodies should have enough to finish the tournament in victory.