Michael’s dazzle in Donnybrook as ’Rock roll over 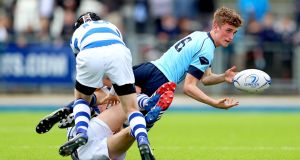 St Michael’s College produced a stunning performance at Donnybrook on Wednesday afternoon to secure the Leinster Schools Junior Cup title at the expense of Blackrock College in a replayed encounter.

The sides had finished on level terms (7-7) in the same venue seven days earlier, but although ’Rock were seeking an historic fifth consecutive final win at this grade, they ultimately couldn’t rein in the challenge of their south Dublin rivals.

Michael’s had broken the deadlock with just under nine minutes gone on the clock, as talismanic outside-centre Chris Cosgrave crossed over after racing onto his own chipped kick towards the ’Rock whitewash.

However, Michael’s issued a further blow to ’Rock’s chances in first-half stoppage time, when Jack Boyle drove over on the left wing to give his side a 12-3 interval lead.

A wayward place-kick effort from Dixon let them off the hook after the restart, before Michael’s quickly increased the tempo of their play. Fly-half Niall Carroll finished off a sweeping move across the ’Rock line for his side’s third try of the day, and this helped Michael’s to open the floodgates.

Replacement Seb Lowe claimed a second try for ’Rock deep into time added on at the end of the contest, but it wasn’t enough to deny Michael’s their first junior crown since 2012.