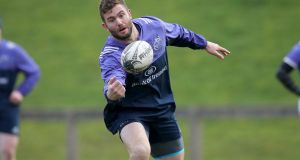 Munster’s Jaco Taute was to return to South Africa in January until the IRFU extended his loan deal. Photograph: Ryan Byrne/Inpho.

Recalling the way he slapped his Munster crest in celebrating his try against Glasgow 13 minutes into his European Champions Cup debut, it comes as no surprise that Jaco Taute can hardly wait for this Saturday’s quarter-final.

In fact, his excitement is so palpable when listening to him that you’d almost share his wish for it to be kick-off already.

That emotionally charged encounter with Glasgow was only his third game in a Munster jersey, although admittedly coming the day after Anthony Foley’s funeral not even a relative newcomer could be immune from the emotion of that extraordinary day at Thomond Park.

Also clearly immersed in Munster and their European heritage, Taute himself recalls watching the Munster-Toulouse quarter-final at the same ground three years ago when looking ahead to this latest high-octane collision.

“It’s one of those occasions you want to be part of. I think it’s very good for the community because it has been three years since there’s been a quarter-final at Thomond so I think the fans deserve this one and I hope they enjoy it as much as we will enjoy it.”

Talk about buying into the Munster zeitgeist.

“I think because of its rich tradition and history Munster has in Europe one of the most successful win rates, I think it’s seven wins out of eight quarter-finals they’ve won so the place is buzzing and the team is ready. All the players are ready and you can feel the excitement around. We will probably have to take it back a notch so we don’t overdo it, but yes there’s definitely excitement and the guys are ready to go and you can feel that energy. It’s just a special week.”

A packed Thomond Park on European Cup nights is indeed a little special, and Taute clearly has a liking for them, having also scored a brace of tries in the home rout of Leicester as well as being a stand-out performer in the pool finale at home to Racing. Cue a fourth Euro full house.

He also extracts additional motivation from it.

“Yeh, every player does. The crowd really lifts you up and supports you and home advantage is big but it’s not everything you still have to run out on that pitch and give it everything.”

Under the terms of his original loan deal Taute was due to return home in January, before the IRFU agreed to extend his stay until the end of the season at least. His future beyond that remains uncertain.

“I don’t know yet. We’ll have to see I would love to play here but there is still a lot of water to run under the bridge so we’ll take it week by week. I’ve been doing that for the past number of weeks and it’s been paying dividends, so I don’t like to look too much ahead into the future. I’m just running out on the pitch and giving it my all.”

In any event, the thought of watching this quarter-final in South Africa almost sends a shudder up his spine.

“I think I would have cried. The season has been so great and we’ve been working really hard and we’ve been keeping our feet on the ground but I think the biggest thing is that we don’t get complacent.

“We know what to do so I feel it would have been sad not to play or be involved. I’m just very grateful. Yes I count my blessings every day. It’s been a special time so for but it’s not over yet we’ve got some hard work to do and it’s exciting.”