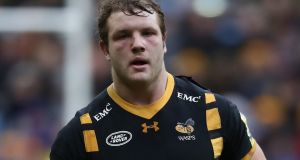 Wasps’ star-studded backline have been urged to show more “belly for the fight” if they intend to transform the club from great entertainers into title winners.

No team in England has scored more tries than the Premiership leaders but head coach Dai Young has warned his squad that scintillating attack alone will not earn a European semi-final at Leinster’s expense on Saturday.

The range of crowd-pleasing talent at Wasps’ disposal behind the scrum is almost reminiscent of the Harlem Globetrotters, with Kurtley Beale, Willie le Roux, Christian Wade and Danny Cipriani capable of electrifying a game at any moment. Young, though, has no desire to be seen as the Kevin Keegan of rugby union coaching, applauded for the spectacular way his side attack but without any trophies to show for it.

“We certainly don’t advocate the Kevin Keegan approach to gameplans where we are happy if they score one because we will score two,” he said. “Without a doubt we have plenty of X-factor but that quality has to be underpinned by work rate and physicality. The frustration I get sometimes is I don’t see that every week. That’s probably just me being a grumpy coach but it is my job to keep banging the drum.

“From here on in we have to demonstrate in every game that we have the belly for the fight. We have the quality but quality alone won’t win us these games coming up. We are not going to just win these games with five minutes of brilliance.”

With the grounds hardening up, though, and Wasps already certain of a place in the domestic play-offs, the Champions Cup last-eight trip to Dublin on Saturday represents a golden chance for the club’s big-money signings to repay a chunk of their sizeable salaries.

“We need these guys to really step up and play like we all know they can,” Young said. “We are playing against a formidable team, we know how tough it is going to be and this is where your top players stand up. This is the stage [for which] you pay that extra bit of money and buy your Kurtley Beales and your Danny Ciprianis. You want your real quality players to do something a little bit different and hope they can win the game for you.”

Le Roux (concussion) and James Haskell (dead leg and back spasm) are expected to be fit for Saturday’s game at the same Aviva Stadium where England came a Six Nations cropper this month.

However, Wasps skipper Joe Launchbury insists revenge is not his team’s primary motivation before a game which has all the makings of a thrilling sequel: “We have got a couple of guys who were there but we have also got an entire squad who have worked extremely hard to get to this position.

“Wherever we play, we will go there with all guns blazing and give it a good shot. It’s a chance for us to go out on the big stage and show what we can do. To go to the Aviva and get a win would be huge for us,” Launchbury said.

With Johnny Sexton set to feature at outhalf for Leinster, it is also an opportunity for Cipriani to measure himself against a player with every chance of pulling on the No10 jersey for the Lions this summer. “For players who want to progress and play rugby in the summer, the longer we’re in competitions the more chance they’ve got of forcing their way in,” Young said.

“I’d like to think his full focus is doing well for Wasps . . . that can help his ambitions [to be] on the big tour. If you don’t get on that, I’m sure he’ll want to get on the England tour. He’ll want to be playing rugby somewhere in the summer but he’s no different from anybody else.”

Launchbury also reiterated personal glory is a secondary issue to winning the collective breakdown battle and preventing Leinster from slowing their visitors’ ball down. “We need to understand that teams are going to look to do that against us,” said the England secondrow. “But if we have quick ball with the guys we have talked about we are dangerous.”