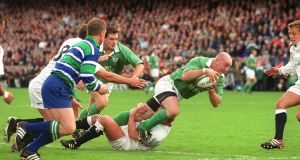 For the fourth time since the beginning of the Six Nations Championship in 2000 England travel to Dublin seeking a Grand Slam. They were unsuccessful in similar quests in 2001 and 2011 while achieving the stated goal in 2003, when both teams were pursing the same reward on that occasion.

In the history of the Five/Six Nations Championship no country has been denied a Grand Slam on the final day more times than England. It’s happened to them on seven occasions, but Ireland are not too far behind on that score, having five times fallen at the final fence.

In 2001, England travelled to the old Lansdowne Road in October – it was the year of foot and mouth in Ireland, so they played their final three Six Nations fixtures in September and October – hoping to avoid an infamous hat-trick.

They had been denied Grand Slams in the final round of fixtures in 1999 (by Wales at Wembley) and 2000 (by Scotland at Murrayfield). However, Clive Woodward’s side were again forced to endure bitter disappointment, losing 20-14 to an Ireland side inspired by Keith Wood’s try.

England went into the game as favourites, having won 11-matches on the bounce and with their hosts coming off a bitterly disappointing defeat to Scotland in Murrayfield that denied them a tilt at their own Grand Slam. Woodward said in the aftermath: “It’s massively disappointing, especially for the players. All we can say is sorry.”

The apology expired two years later when the bones of that England team won a Grand Slam and World Cup in 2003. As the graphic illustrates, it’s interesting to note that Ireland have only ever prevented one country, England, from winning a Grand Slam on the final day of the tournament, both times in Dublin.

The second occasion was on March 19th, 2011, when Ireland won 24-8 against Martin Johnson’s England side. From an Irish perspective, the scenario leading into that match is similar to some degree to this weekend given that Ireland had won two and lost two matches in the 2011 tournament.

Declan Kidney’s Ireland were 13/8 to win the game even though they had won six of the eight previous matches between the sides. As things stand, Ireland are 6/5 outsiders for Saturday’s encounter. Gerry Thornley, of this parish, concluded in his preview of the game with the following observations.

“But have things gone a little stale for this Irish team? Do they have the enthusiasm and belief to finally deliver? It would be no great surprise if they did but England have the confidence and momentum, as well as the greater prize at stake.”

As it transpired the answers to those questions were, ‘no,’ and ‘yes’, while the final line would sit as neatly in Saturday’s preview as it did six years ago. Eddie Jones’s current English cadre is a better team though.

Saturday’s visitors will prefer to remember the 2003 match – we’ll leave the redcarpetgate to one side – when they thumped Ireland 42-6. It was a first Grand Slam for England since 1995 and brought to an end the aforementioned triple heartbreak of 1999, 2000 and 2001. Since then they have lost out on a Grand Slam in their final outings of the 2011 and 2013 tournaments.

In the Five/Six Nations Championship a team has been prevented from winning a final-day Grand Slam on 23 occasions, six of those when both sides were unbeaten when squaring off. England and Wales lead the way having been party poopers seven times apiece, while France (four), Wales (three) and Ireland (two) have achieved comparable feats.

On the other side of the equation, England (seven) have been denied more times than any other country on the final day, while Ireland (five) have known their fair share of heartache losing to Wales (1926), Wales ( 1969), France (1982) and England (2003), and were cruelly denied in 1951 when they could only draw 3-3 with the Welsh.

Scotland and France have each slipped up on four occasions, while Wales have failed three times on the final day. England are the reigning Grand Champions and will be trying to achieve that milestone a remarkable two years in succession, and along with it a world record (19) wins against tier-one nations.