Jimmy Gopperth in no doubt about task facing Wasps 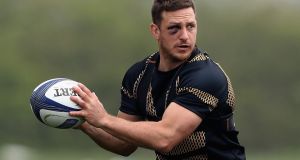 Jimmy Gopperth: “We just have to be mentally on because it is going to be a knockout game of international standard.” Photograph: David Rogers/Getty Images

Safely ensconced in the Wasps hive, Jimmy Gopperth took a deep breath before pressing the buzzer that links him to a not so distant past.

Dublin-based rugby scribes conference calls into the ever worsening Brexit zone can so easily conclude in calamity. Thankfully, Gopperth is a welcome exception to the general rule of media interaction in that he’s unafraid of offering an opinion.

On receipt of a vague invitation to talk about Ross Byrne and Joey Carbery, he moves in another direction. Neither academy outhalf had entered his consciousness back in 2015 but he recognised a British and Irish Lions tighthead at first sight.

“I always thought Tadhg Furlong was going to go on to greatness. He was a young fella coming through the academy and he was strong as an ox. He’s got that farmer’s strength about him but it was more than that, it was an attitude. It was the way he sees himself, very humble guy, a very grounded guy.

“He has come on leaps and bounds. He was outstanding in the Six Nations and he has more or less booked his plane ticket to New Zealand in the summer with the Lions.”

Any nomadic sporting career can dip into obscurity but this Kiwi has proven himself time and again. Sure, he followed the money – Wasps shelling out €300,000 a season for his services – but over the past eight years of full employment in Northern Hemisphere rugby, he accumulated the points to win more games than he lost regardless of the crest stitched over his barrel chest.

The Gopperth numbers stack high: 52 runs for the Wellington Hurricanes over three seasons saw the versatile fly-half – he’s expected to wear 12 in Dublin on Saturday – register 354 points. There was a final season in New Zealand with the Auckland Blues – 11 matches, 104 points – before the Newcastle Falcons sought to paper over the void left by Wilkinson’s departure to Toulon.

Four seasons, 70 games and 719 points later, Leinster scrambled to fill Sexton’s unplanned leap off the IRFU blimp. Gopperth, seemingly, was hired to hold the line until the age of Ian Madigan was ushered in. Yet during Matt O’Connor’s brief sojourn Gopperth became a regular spectacle for patient Leinster supporters – unlike their board – to mull over.

The Australian coach won no friends in the hierarchal structures of Irish rugby by selecting Gopperth at 10 over Madigan for every game that mattered (when O’Connor cocked his musket and fired over the IRFU bow, David Nucifora and Joe Schmidt responded with napalm. The end, when it came, was sudden).

All the while Gopperth kept proving his worth – notching up 350 points in 58 games – yet his very presence was a constant reminder of Sexton’s second-half performance in the 2011 Heineken Cup final against Northampton.

The 33 year old is, above all else, reliable but like most outhalves he exists well below the stratospheric achievements of Wilkinson or Sexton.

Wasps gladly took him in. Danny Cipriani, their prodigal son, has returned to play 10 and while Kurtley Beale was nursing a sliced patella tendon, Gopperth set up shop at second-five-eight.

“We more or less share the 10 role,” he said of life beside Cipriani. “Not unlike what myself and Mads did at Leinster.”

Beale recovered and Willie Le Roux trekked up from South Africa to allow coach Dai Young construct a sensationally elusive backline, alongside Elliot Daly and Christian Wade, yet the wise old Welsh prop stuck with Gopperth as an alternative playmaker.

“Ended up Danny and I work really well together,” Gopperth continued.

“We both understand the game. I’m probably the more steady hand than himself. He has all the flair and creates a lot of opportunities. We seem to have a good relationship and I’m enjoying myself being wider out, more space, lot more time on the ball. And with two receivers we can play a high-tempo, expansive game.”

Maybe the Premiership is easier terrain to the Pro 12 but 530 points in 49 appearances, over the past two campaigns, smashes his Leinster numbers racked up over a longer period. Where Madigan place kicked, Cipriani gives way.

“The Premiership on a whole is a lot stronger than the Pro 12,” Gopperth states matter-of-factly. “Guys come over here and realise it is like Leinster v Munster every week. There is no let up. Even the bottom teams will give you a run for your money.

“It is a lot more attritional over here. Obviously the English union don’t have control over the players like they do in Ireland so the internationals are playing every single week.

“It’s a great competition that is getting stronger and stronger. The skill level is getting a lot better because a lot of teams have outstanding pitches, a lot of artificial pitches but even the grass ones, there are no mud pitches anymore.”

Anyway, back to Furlong.

“I am really happy for Tadhg. He’s a bloody good bloke and it’s just good to see a young guy from the countryside doing really, really well.”

Gopperth is from New Plymouth. Not many more rugged places can gift an outhalf with enough farmer’s strength to survive at inside centre but he is keenly aware how the new Leinster triumvirate – Sexton, Robbie Henshaw and Garry Ringrose – tore up Northampton in December.

“We know what they bring. Robbie is a physical and outstanding player and Garry has been going strength to strength. He runs very, very clever lines and Johnny is Johnny.

“We know what’s coming and it will certainly be a very physical challenge. The likes of Seanie [O’Brien I] ’m sure will be lining me up to give me one or two.