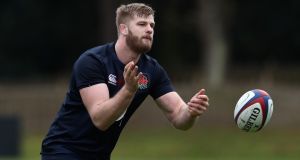 George Kruis: Eddie Jones is a big fan of the player describing him as “a super scrummager, the best scrummaging lock in England, so we’re missing him”. Photograph: David Rogers/Getty Images

George Kruis faces a race against time to convince Warren Gatland he warrants a place in the British and Irish Lions squad this summer but the Saracens director of rugby, Mark McCall, believes the secondrow already has enough credit in the bank to deserve selection.

Kruis missed the Six Nations after undergoing knee surgery in early February and will miss Saracens’ European Champions Cup quarter-final against Glasgow on Sunday. The earliest he is likely to make a comeback is against Northampton on April 16th – three days before Gatland names his squad – and even that fixture may come too soon.

McCall however, believes that Kruis’s form for club and country – he has started all England matches under Eddie Jones for which he has been available – and his leadership at the lineout makes him a contender despite his prolonged absence.

McCall said: “I think George has a chance of making the Lions tour because he’ a lineout caller and is probably the best lineout caller around. That’s a real string to his bow. He’s also a great player, so I think he’s got a chance. George could be back towards the end of April, that’s the best guess, but it could be sooner than that.”

With Kruis sidelined, Joe Launchbury and Courtney Lawes shone in the second row for England during the Six Nations while Maro Itoje played at blindside flanker.

With the Wales captain, Alun Wyn Jones, Scotland’s Jonny and Richie Gray and the Ireland pair of Devin Toner and Iain Henderson also coming into the equation, the second row is arguably the most competitive position for Lions selection.

During the Six Nations however, despite the prowess of Launchbury and Lawes in the second row, Kruis was described by Jones as England’s best lock when it comes to both the scrum and calling the lineout.

“To have him [Kruis] not in the side is difficult for us,” said Jones in reference to Ireland’s Peter O’Mahony stealing a late lineout in their victory over England at Dublin. And when explaining his decision to swap Itoje and Lawes at scrums against Wales he said: “George Kruis is a super scrummager, the best scrummaging lock in England, so we’re missing him.”